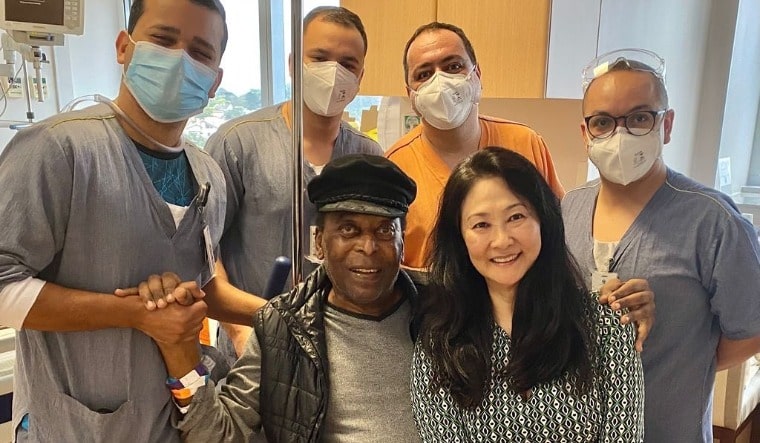 Pele on his last day at the hospital | Facebook

Brazilian football great Pele has been discharged from hospital, having received treatment for colon cancer for a month.

On September 4, the three-time World Cup winner underwent an operation in Sao Paolo to remove the tumour from his colon and spent 10 days in intensive care.

The hospital on Thursday declared that he was in stable condition and could return home to continue chemotherapy.

“I have been punching the air more than usual. I am so happy to be back at home,” he wrote on his social media accounts, attaching a picture he took with hospital staff.

“When the road is hard, celebrate every step of the journey. Focus on your happiness. It's true that I can't jump anymore, but these past few days, I've been punching the air more often than usual,” wrote Pele.

“I want to thank all the staff at Albert Einstein Hospital, who made my stay pleasant…. Thank you also to all of you, who from afar, make my life complete with so many messages of love.”

Pele was diagnosed with cancer towards the end of August when he went for a routine checkup. There was little news from him after his surgery on September 4, but his medical team and hospital staff repeatedly told the media that he was recovering well.

Over the last few days, though, Pele returned to social media and posted pictures and videos of his recovery in the hospital.

On September 25, he even belatedly congratulated Lionel Messi on Facebook and Instagram for breaking Pele’s record of most goals scored by a South American for the national team.

Pele, regarded as one of the greatest footballers of all time, had scored 77 goals in 92 games for the national team.

He retired from football in 1977 and has had health issues over the last decade. Besides hip problems, he also struggled with urinary tract infection for which he was in the ICU in 2014 and 2019.