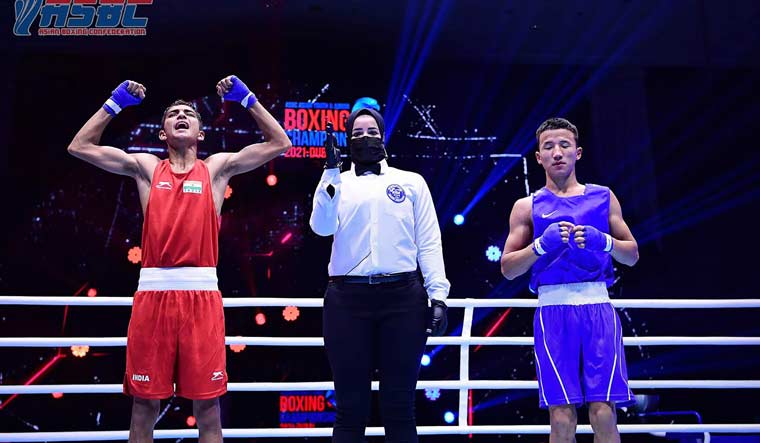 Dubai: India's Rohit Chamoli (in red) celebrates his win against Mongolias Otgonbayar Tuvshinzaya in their final bout at the ASBC Asian Junior Boxing Championships in Dubai on Sunday, Aug 29, 2021 | PTI

It was gold rush for India at the Asian Junior Boxing Championships in Dubai with four pugilists from the country finishing on top in the finals held on Sunday.

While Chamoli defeated Mongolia's Otgonbayar Tuvshinzaya in an intense final, Joon got the better of Kazakhstan's Yerdos Sharipbek 5-0 to finish on top.

Chamoli rallied after losing the opening round to prevail 3-2 in the hard-fought contest.

Joon, on the other hand, easily out-maneuvered his rival, who fizzled out after a decent start.

In another final, Gaurav Saini (70kg) signed off with a silver medal after losing 0-5 Boltaev Shavkatjon of Uzbekistan.

After her, Tanu edged past Tomiris Myrzakul of Kazakhstan in a split 3-2 verdict.

However, Muskan (46kg) had to be content with a silver medal after being bested by another Uzbek Ganieva Gulsevar in a closely-fought bout.

At the ongoing edition, the gold medallists in the junior category will be awarded with USD 4,000 while USD 2,000 and 1,000 will be given to the silver and bronze medal winners respectively.

On Monday, 15 Indian boxers will fight for gold in the youth event.