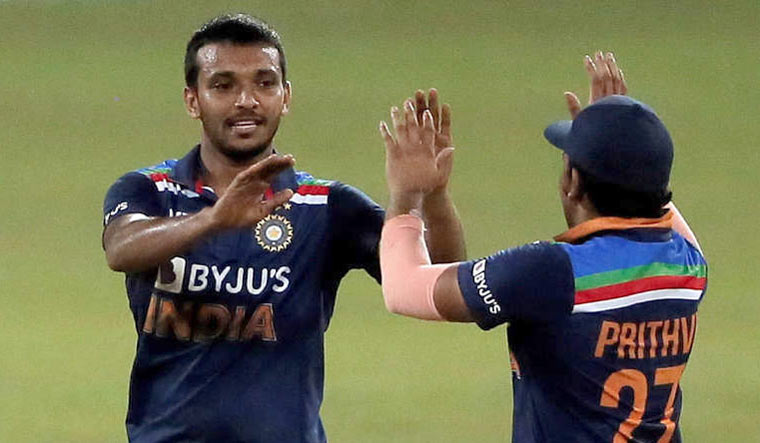 His entire life flashed before his eyes when he geared up to bowl on his international debut, says young pacer Chetan Sakariya, reflecting on his journey in India colours during the recent limited-overs tour of Sri Lanka.

The 23-year-old had a meteoric rise in the past six months as he first impressed in the IPL after being picked up by Rajasthan Royals and then went on to represent India, claiming three wickets in the two T20Is and one ODI against Sri Lanka.

"When I was preparing to bowl that first ball, I had a couple of minutes to go through marking my run-up, warming up etc, and in that moment, I could see a flashback of everything that had unfolded in my life – the good, the bad, the sacrifices, the support, the criticism - everything.

"So, it was emotional but gave me a lot of motivation to do well and that was the thought in my mind," the left-arm pacer from Saurashtra, who had lost his father to COVID-19 in May, said in a release issued by his IPL franchise RR.

Sakariya came into the limelight when he was snapped up by Rajasthan Royals at the IPL auction for Rs 1.2 crore and he impressed with seven wickets in as many matches in the first phase of IPL.

"...to make it to the Indian team, it has been a dream come true. When I first heard of it, there were a lot of thoughts in my head, but I was unable to believe it," he said.

"I pinched myself because I was wondering if it was even true. I didn't think of it in a way that I would get to play or not, just being a part of that dressing room was a huge moment for me."

Talking about his first interaction with Rahul Dravid, who was the coach of the Indian team in Sri Lanka, Sakariya said: "...I was shocked and startled at first because I couldn't believe that it was really him...he asked me about my family background, playing experience.

"He also asked about cricket in Saurashtra and how we've been doing well in the last five years, and complimented me for my bowling and said he had followed my journey during the IPL, and that he liked how I bowled with the new and the old ball.

"So, it felt amazing that a legend like him knew who I was and was following my performances."

"I met Bhuvi bhai during the nets, and saw him bowling consistently at one spot, so I asked him what the secret behind it was, and he told me that the secret was to feel the action, and make sure that the focus is on each step during the run-up. So that was special, and I've tried doing that as well," he said.

The remainder of the IPL is scheduled to begin in the UAE from September 19 and Sakariya said he has spent some time in Chennai under the guidance of RR's strength and conditioning coach A.T. Rajamani Prabhu to be in good shape.

"I had about two weeks where I wanted to focus on explosive training because T20 is a format where you need to produce that explosive energy any time in the game.

"So, I was working a lot on that under humid conditions, which certainly helped me retain my fitness levels during the off-season," he said.

With the Royals currently occupying the fifth spot in the table, Sakariya reckons his team has a good chance of making it to the playoffs.

"Therefore, I just want to focus on doing well for my team because I know that if I'm able to contribute, we will be able to win and hopefully make it to the playoffs."