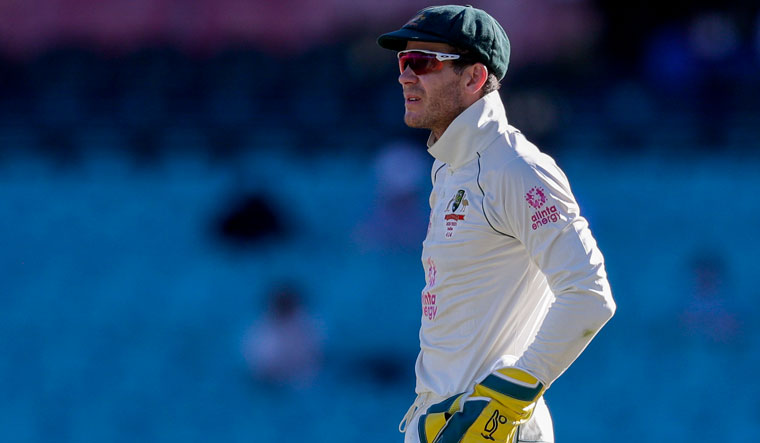 Australia captain Tim Paine on Friday stood by his comments that his team indeed got distracted by India's "sideshow" but clarified that he didn't ever intend to use it as an excuse for their home Test series defeat in January.

A day after receiving online flak from Indian fans for his "sideshow" comments on Indian team, Paine clarified himself while chatting with former Australian wicketkeeper batsman Adam Gilchrist in a podcast.

"I was asked a number of things, and one of those was talking about the challenges of playing against India. One of them is the distraction they can create," Paine said in the 'Gilly and Goss podcast' on Friday.

"There was a lot of talk that they weren't going to Brisbane. They're always changing gloves and bringing out physios and all that can get on your nerves. Just said that was one of the things that probably distracted me and took my eye off the ball at times."

The 36-year-old Paine had said that his team was distracted by the Indian team's "niggling" during the epoch-making Test series early this year which the visitors rallied to win despite being ravaged by injuries.

Soon Paine was trolled on twitter by Indian fans.

"I did say that they simply outplayed us and that they deserved to win but they left that one out. The Indian fans have been slamming me on social media. They say that I'm making excuses again but it's all good fun," Paine said.

"Absolutely, I think anytime an Australian captain speaks publicly, is gonna to see the light of the day, there's no doubt about that. Like I said, it was a wide-ranging interview for a long period of time.

"I certainly wasn't making any excuses. I was asked about some of the challenges of the summer, and I said that was one of them for me," he added.

Paine said he doesn't mind getting "a bit of stick" and despite all the criticism he still loves his Indian fans.

"I love Indian fans. I don't mind getting a bit of stick, particularly when you deserve. They ripped me off in the summer when I dropped those catches, that was totally fair.

"I love the passion...I love how much they love cricket. I like how much they interact. For some people it's positive interaction... most of the times they are in to me, but I don't mind that."

India prevailed 2-1 in the rubber that went down as one of the greatest bilateral contests of all time. India bounced back from being 36 all out in the opening Test to humble the home side despite, at one time, struggling to put together a fit playing XI.

India sealed the series at Gabba after scripting a record chase of 328 with 19 balls remaining on the final day for a thrilling three-wicket win.