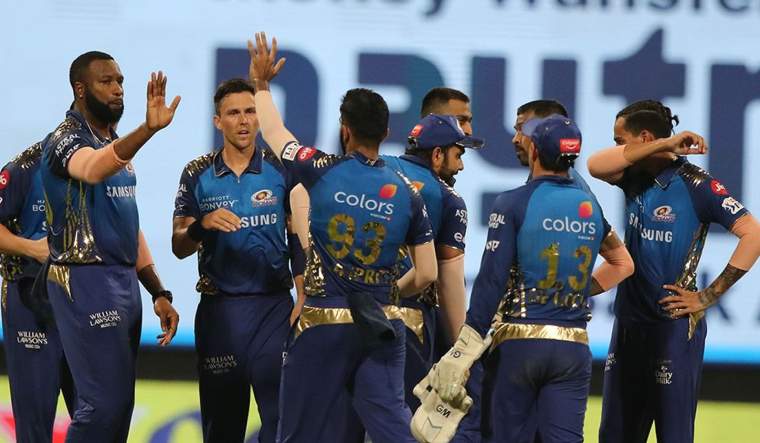 Mumbai Indians is the only team to have made it to the next stage so far | iplt20.com

Writing a weekly sports column presents a host of challenges. When the cricket broadcast on television has transformed from a one-end, single-camera-coverage into providing every minute detail of the game to the viewers at home, it has been nothing short of a revolution. For the record, the 360 degree viewing experience of the final of the ICC Cricket World Cup last year was provided by 36 cameras. When television virtually takes the viewer to the centre of the action, the written word is expected to provide him with what he doesn’t get to see on television. Anybody who has been a part of the sports broadcasting industry sitting down to write would know that he is likely to sound more dogmatic in his writing and that it is also likely to leave a more-lasting impression. Hence, the value of the written word never declines although the challenge to see what you don’t get to see on television looms large!

One of the challenges I face while writing a weekly column, especially during a popular sporting event, is to get the ‘timing’ right. Sometimes a moment happens far too early that it passes you by, by the time it’s time for you to write. In some other cases, it happens just after you have published your article, either reducing the relevance of what you just wrote or leaving you with the feeling “Wish I could incorporate that too!” The idea is to, like in batting, ‘play late’ but a tournament like the Indian Premier League, like the very format of the game, moves too fast. The IPL has always been a tournament of glorious uncertainties and invariably, the race to make the play-offs is touch-and-go.

The history of IPL reveals that it’s not necessary that the strongest team or the one which gets off to a steady start always wins it. There are exceptions though, like the Rajasthan Royals in 2008 and the Chennai Super Kings in 2011 when their consistent performances culminated in title wins. That’s why ‘peaking’ at the right time is so very important in sport. With only four matches to go before the play-offs in this edition, only two teams have been confirmed of their fate; Mumbai Indians is the only team to have made it to the next stage so far and the Chennai Super Kings the only team to play for just pride.

Shreyas Iyer would be the most worried captain at the moment. Having won seven out of their first nine games, the Delhi Capitals looked like the team to beat. The skipper and the young Prithvi Shaw were firing with the bat, the South African bowling pair of Kagiso Rabada and Anrich Nortje looked sharp and the team looked impressive. But, things changed for them in the last couple of weeks with the Capitals losing all of their last four matches. Hammered by the Kolkata Knight Riders and the Sunrisers Hyderabad, by 59 and 88 runs respectively, Shreyas Iyer appeared happy when the stand-in Mumbai Indians skipper Pollard invited them to bat first last Saturday. But the happiness would vanish in no time. For a Mumbai Indians unit high on confidence and form, the target of 111 runs was chicken-feed and completing the formalities of a chase was just a stroll in the park for them. Yet another loss for Delhi, this time by 9 wickets.

Injuries to some of its key players might have robbed the Delhi Capitals of the momentum, but it might also be that they must have taken it a bit too lightly once they were at the top of the table. The team hasn’t shown any real intent lately and hence finds itself in a bit of a hole from what was a position of clear dominance. And when they face the Royal Challengers Bangalore on Monday, it becomes a battle of two teams with a similar tale in the tournament. Like Delhi, Bangalore was also comfortably placed with six wins in nine matches but with three consecutive losses, there is a question mark against them after losing three matches in a row. Notwithstanding the contributions of the exciting Devdutt Padikkal, the over reliance on the Virat Kohli-AB de Villiers duo seems to have come back to bite them. Should these two teams look up to the Kings XI Punjab and draw inspiration from the way it fought back into the reckoning after being down and out at one point, we are in for a cracker at Abu Dhabi.

When a team knows that it has nothing to lose, it might be the most dangerous opponent one can encounter. The Chennai Super Kings, finding themselves in a rather unfamiliar territory, handed over such a lesson to the Kolkata Knight Riders the other day. Having 27 runs to defend with just nine balls left, the Knight Riders would have fancied their chances but Ravindra Jadeja had other ideas. That innings from him was a reminder of the fact that in a scenario like that, experience is just as important as any other aspect. KKR have their play-off chances dented with too many ‘ifs and buts’ and too much dependence on the numerical aspect of it.

Think of ‘peaking’ and the Rajasthan Royals just seem to be doing that. An impressive run chase against the Kings XI meant that they have got the momentum going but has it come a tad too late? Although placed fifth on the table, they are still in it. Ben Stokes coming to the party with two back-to-back ‘Man of the Match’ performances and Sanju Samson showing consistency with the bat are heartening for the Royals. With the Sunrisers and the Kings XI running neck-to-neck, the race has gotten tantalisingly close. If one takes the two most successful teams in the history of the IPL as a case study, it tells you one thing. That it’s about sustaining the momentum and peaking at the right time.

All the teams in the mix have shown that they have adequate resources and now it’s all about hunger, intent and a bit of luck. It’s a mouth-watering prospect for the fans and yes, there is enough in it for a writer, too. He doesn’t have to worry about the moments that passed him by anymore!