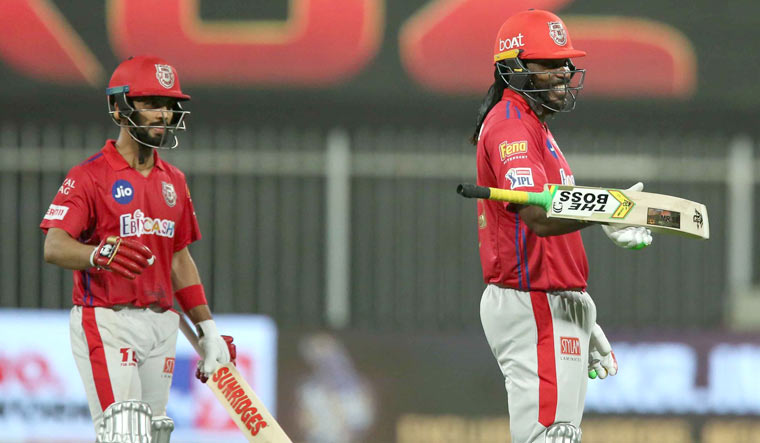 Chris Gayle of Kings XI Punjab raises his bat after scoring a fifty, while Mandeep Singh looks on during their IPL 2020 match against Kolkata Knight Riders at the Sharjah Cricket Stadium | iplt20.com

Kings XI Punjab continued their red-hot form, humbling Kolkata Knight Riders by eight wickets in their IPL 2020 match in Sharjah today. With their fifth consecutive win, they jumped to the fourth position on the points table.

Chasing 150 to win, Mandeep Singh (66* off 56 balls) and Chris Gayle (51 off 29 balls) put on 100 runs off 61 balls for the second wicket to snuff out any hopes that KKR had of making a match out of it. Skipper K.L. Rahul chipped in with 28. Though KKR bowlers, especially the spin duo of Sunil Narine (0/27) and Varun Chakravarthy (1/34), tried to dry up the runs in the middle overs, Gayle's counterattack (two fours, five sixes) tilted the match decisively in KXIP's favour.

Earlier, the Punjab bowlers dished out a disciplined show, especially at the back-end, to restrict KKR to a modest 149/9.

Mohammed Shami (3/35) was the pick of the KXIP bowlers while leg-spinner Ravi Bishnoi (2/20) and Chris Jordan (2/25) claimed two wickets apiece to put brakes on KKR who were invited to bat first.

After a familiar jittery start, KKR got the momentum going with opener Shubman Gill (57 off 45 balls) and skipper Eoin Morgan (40) firing all cylinders inside the Powerplay.

But Jordan pulled things back for his team by brilliantly mixing up his slow deliveries, while Bishnoi took the prized scalp of Morgan after KKR reached 54/3 inside the Powerplay.

Morgan holed out to Murugan Ashwin at deep square leg as Bishoi ended the freeflowing partnership for 81 runs from 47 balls and from then onwards KKR struggled to get going.

Earlier, KKR had another messy start and looked in deep trouble at 10/3 inside two overs after Shami's exceptional first over. Opener Nitish Rana got out for a golden duck and Shami dismissed Rahul Tripathi (7) and Dinesh Karthik (0) in the space of three balls.