‘You deserved a farewell’: Messi to Suarez on Barcelona exit 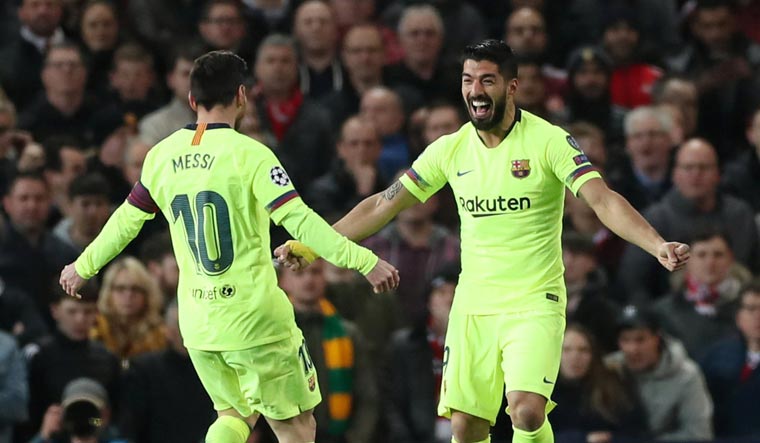 Lionel Messi’s tiff with the Barcelona management came to the fore yet again, as he criticised the club for the way his strike partner Luis Suarez was treated, resulting in the latter’s exit.

The Uruguayan striker ended his six-year association with Barcelona this week, after new coach Ronald Koeman informed his soon after taking charge that his services were no longer wanted at the club. Suarez will be joining Barca’s La Liga rivals Atletico Madrid.

Messi, who had threatened to leave Barcelona last month but was later forced to honour his contract, had recently hit out at club president Josep Maria Bartomeu's leadership. He said that Suarez, the club's third-highest scorer of all time (198 goals), was harshly treated by Barca. Bartomeu had left Suarez, who had one year left on his contract, off a list of players not for sale after the humiliating 8-2 defeat to Bayern Munich in the Champions League in August.

"You deserved a farewell befitting who you are: one of the most important players in the history of the club, achieving great things for the team and on an individual level," Messi wrote on his official Instagram account.

“I had already begun to imagine it but today I went into the dressing room and it truly dawned on me. It’s going to be so difficult to not continue to share every day with you both on the pitches and away from them.

“We’re going to miss you so much. We spent many years together, many mates, many lunches and many dinners. So many things we will never forget, all the time we spent together,” Messi wrote.

“It will be strange to see you in another shirt and much more to come up against you on the pitch.

"You did not deserve for them to throw you out like they did. But the truth is that at this stage nothing surprises me anymore."

Suarez, too, had paid an emotional tribute to Messi in his farewell news conference, recalling how they had become best friends as well as prolific strike partners.

Messi had spoken out against some of the club's decisions the recently concluded season, the first without a title since 2007-08.

The season included a coaching change and exchange of public accusations between players and some club directors.

Barcelona begin their La Liga campaign against Villarreal on Sunday.