The couple announced the pregnancy late in May 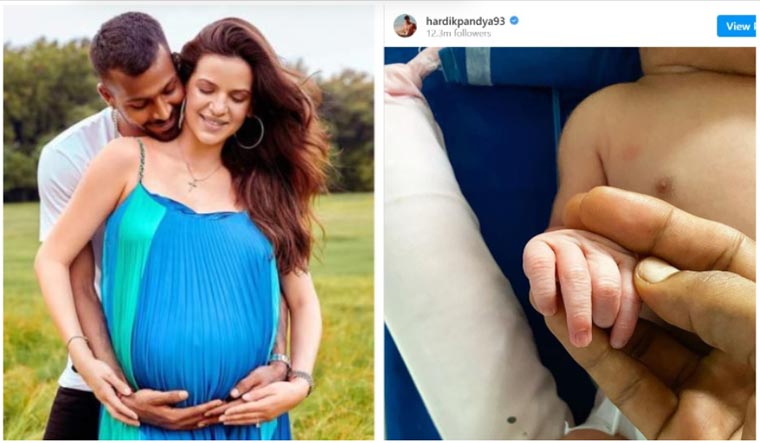 Hardik Pandya with Natasa Stankovic; the picture of their baby Pandya shared on social media

India all-rounder Hardik Pandya and fiancé Natasa Stankovic have been blessed with their first child—a boy. Pandya took to social media to share a glimpse of the newborn. “We are blessed with our baby boy,” he wrote on Instagram.

Wishes and congratulatory messages from celebrities and fans soon started pouring in. His India teammates like Shreyas Iyer, Shikhar Dhawan, Kuldeep Yadav, Virat Kohli, K.L. Rahul, Yuzvendra Chahal, and tennis star Sania Mirza were among the first ones to congratulate the couple.

We are blessed with our baby boy ❤️🙏🏾

On Saturday, Pandya had shared an adorable picture of the couple on Instagram with a ‘heart with a ribbon’ emoji.

The Indian all-rounder was seen embracing the Serbian model and actor, to whom he proposed in January this year, in the picture. There was no caption except the heart with a ribbon emoji and tagged accounts of their stylists and photographer from the photoshoot.

The couple announced the pregnancy late in May by posting a bunch of pictures of their Instagram. They got engaged after Pandya proposed to Natasa aboard a yacht in Dubai on New Year’s Day.

Pandya is expected to be back in action on the field for Mumbai Indians in the Indian Premier League, the 13th edition of which will be hosted by the United Arab Emirates in September. The 2020 IPL, which was originally scheduled to be played from March 29, was indefinitely postponed due to the COVID-19 pandemic. With the ICC postponing the T20 World Cup to next year, the IPL will be held from September 19 to November 8.

The Serbian actress has starred in a few Bollywood films and became popular after appearing on Bigg Boss 8.