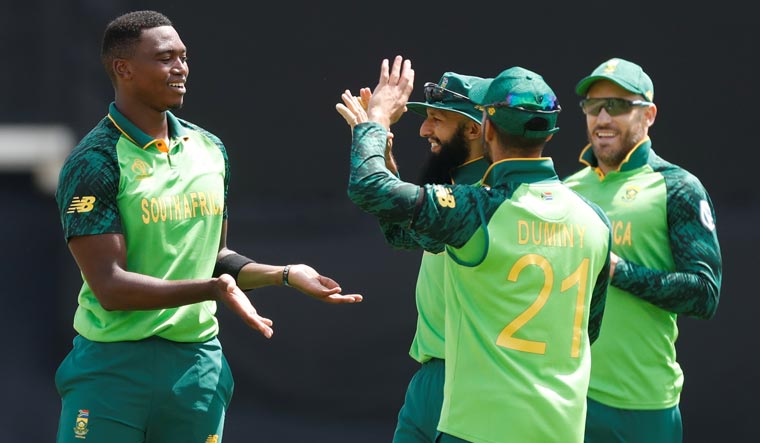 Former South African cricketers Pat Symcox and Boeta Dippenaar have slammed Lungi Ngidi for his support to the Black Lives Matter (BLM) movement, saying the pacer should also speak up against the attacks on white farmers in the country.

The 24-year-old pacer had said that the racism issue is “something that we need to take very seriously and like the rest of the world is doing, make the stand.”

However, Ngidi's comments did not go down well with former wicket-keeper Rudi Steyn, who shared the article on his Facebook page, with Dippenaar and Symcox expressing their criticism in the comments section.

“I believe the Proteas should make a stand against racism, but if they stand up for ‘Black Lives Matter’ while ignoring the way white farmers are daily being ‘slaughtered’ like animals, they have lost my vote,” wrote Steyn, who has played just three Tests and one ODI for South Africa.

Dippenaar, who has featured in 38 Tests and 107 ODIs for South Africa between 1999 and 2007, said: “I am afraid to say ‘Black Lives Matter’ have become nothing more than a leftist political movement.”

“I would suggest that Lungi Ngidi listens a bit more to likes of Thomas Sowell, Larry Elder, Walter Williams and Milton Friedman.”

Former off-spinner Symcox, who played 20 Tests and 80 ODIs for South Africa, too, was scathing in his criticism.

“What nonsense is this. He must take his own stand if he wishes. Stop trying to get the Proteas involved in his belief,” Symcox said.

“Besides the fact that right now Cricket South Africa should be closed down. A proper dog and pony show with cricket being dragged through the mud daily. Buy popcorn and watch.”

“Now when Ngidi has his next meal perhaps he would rather consider supporting the farmers of South Africa who are under pressure right now. A cause worth supporting,” Symcox added.

However, the South African Cricketers’ Association (SACA) has backed Ngidi, terming the comments made by the former players as “unfair”.

“At SACA, we support the concept of the athlete activist. Ultimately, individual activism translates to collective activism and it can lead to institutional change,” CEO Andrew Breetzke told ESPNcricinfo.

“We support Lungi in exercising his right to express his support for the BLM movement and we believe the unfair criticism directed at him undermines that right.”

The ‘Black Lives Matter’ movement gathered momentum following the death of African-American man George Floyd after a police officer pressed his knee on his neck.

The incident triggered protests with West Indies cricketers such as Michael Holding, Jason Holder, Darren Sammy and many more around the globe speaking out against racism.

Cricket South Africa director Graeme Smith on Thursday said his board will figure out in the coming days the “effective role” it can play in the movement in a country that has a history of segregation.