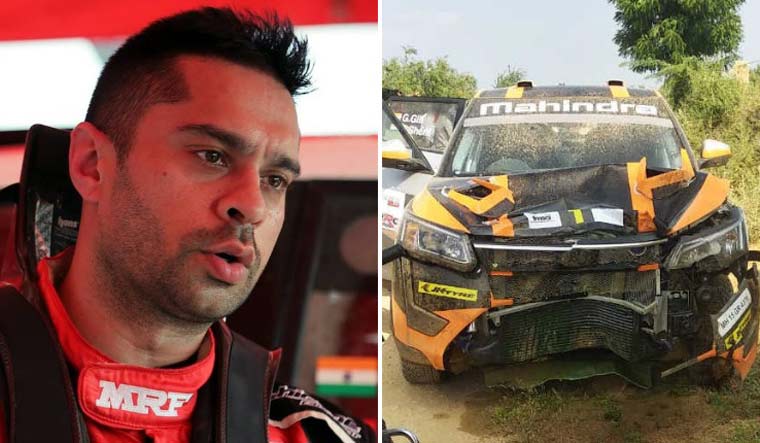 In the Jodhpur round of Indian National Rally Championship, Gill's car collided with a trespassing motorcycle, killing three

In a matter of few weeks, India's top rally driver Gaurav Gill got to experience the best and worst moment of his professional career, leaving the otherwise strong-willed person completely shaken.

Driving through treacherous terrains at lightening quick speed makes you fearless and your vision razor sharp. But one can't really prepare for something which happened with Gill last month.

Going flat out in the Jodhpur round of Indian National Rally Championship, the 37-year-old, driving at more than 160kmph, hit the apex coming out of a blind corner and before he could react, his car collided with a motorcycle, leading to the death of three including a minor who was on that trespassing vehicle.

"This kind of incident teaches you everything about life. Life can't be the same again. It has to change. It is obviously not easy to live with this when it is not your mistake," an emotional Gill opened up to PTI a little more than a month after the "massive tragedy".

"It is something you can't imagine and that is why you don't know how to deal with it."

Life can change quickly, they say.

It changed for the worse for Gill who became the first motorsport person to be awarded an Arjuna Award on August 29, less than a month before the incident.

After the government honour, Gill took part in a World Rally Championship round in Turkey. It was all going as per "the plan" for the Delhi-based drive until the tragedy struck.

"It all happened in less than half a second. I did not see even see the colour of their clothes. It happened that quickly," recalled the three-time APRC champion who was booked for his involvement in the accident.

A Barmer court granted him bail earlier this week.

His life had turned upside down. He feared becoming the target of a local mob following the death of the couple and their child.

"It was just me and my lawyer in Jodhpur. I was pretty much on my own but luckily I had my team members who helped me. The promoter too was around.

"I saw some reports that I suffered serious injuries but I was fine in a day or two. It was a blind corner and at that speed, when the road is 12 or 15 feet wide, what can you do apart form applying brakes and slow down as much as you can. It all happened in a flash."

Gill had not even come to terms with what happened but reports of him absconding surfaced.

"I am very sad people keep saying that I have absconded. I am sitting at home. The cops have not even called me once, they don't require me to be there in person, they called the organisers and my lawyer.

"How can you run away from country's judicial system for over a month? My lawyer has been there since day one. We finally got bail now," he said with a sigh of relief.

The incident left Gill's family in shock, so much so that his wife and mother don't want him to drive in an Indian rally again.

"My wife was not in India (at the time of the accident). I did not know what was going on and there was the threat of local mob. We very scared. So, I struck around there with my lawyer and met family only when I got back to Delhi.

"My kids don't even know what happened. It would have been too much to handle for them anyway. No one is talking about it even at home. That is the only way you can try to get out of that situation," said Gill.

"My wife and mother was like 'why do you want to drive in India any more, you can just do world championships'. But this is what my life is, this is what I do. I don't want to stop for anything," said Gill who will be returning to action with the Rally Australia next month.

Being in the car will never be the same for Gill but that is the only way he can overcome the "mental scars".

"For me the only way to be normal again is to go out there and compete. It will take some time to get up to speed. And it will always remain a dangerous sport," he said adding that he will see a sports psychologist before the rally in Australia.

"I am a mentally strong person but sometimes it's good to walk over the situation," he said.

The accident has also exposed the compromised safety standards at rallies in India.

To ensure such a terrible tragedy is not repeated, Gill has suggested to parent body FMSCI that a test event should be held before a proper rally is staged, like it happens in the WRC.

"It was just lack of organisational experience that led to this. It was all under their control and the organisers could have managed the situation in a much better way. Unlike south India, this part of the country has not seen much rallying, they are not exposed to these kind of speeds.

"In the south, we have regular rally venues so people in those areas understand what is happening. There should have also been more support from our parent body FMSCI.

"We are their responsibility. I had to fend for my own lawyer. But now FMSCI has agreed that it should have a proper legal team. What happened with me, can happen with anyone in future," added Gill.