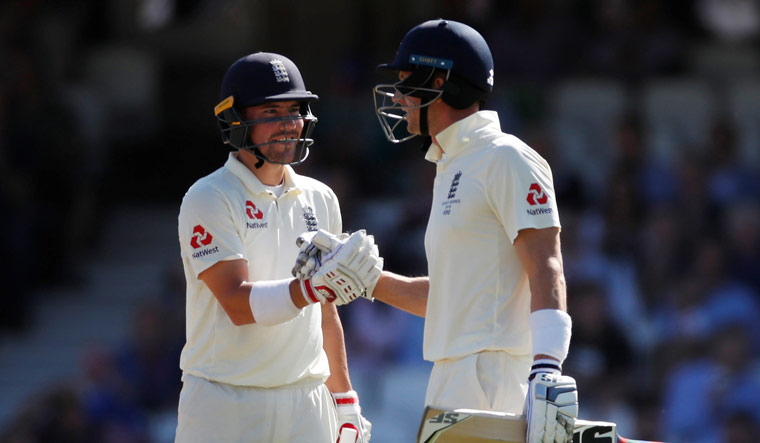 Ben Stokes and Joe Denly batted England into a potentially match-winning position in the fifth and final Ashes Test at the Oval on Saturday as Australia's hopes of a series win faded.

The home side―desperate to finish their World Cup-winning season on a high by levelling the series at 2-2―were 313/8, leading by 382 runs.

England captain Joe Root will be wary of declaring too soon though as India last year made 345 batting fourth at the Oval chasing 464.

Denly made his Test-best score of 94 while Stokes, playing as a specialist batsman, scored 67 after passing 400 runs for the series.

England enjoyed two slices of good fortune on a pitch offering little in the way of help for the bowlers as the September sun beat down from a clear London sky.

Steve Smith dropped Stokes in the slips when the batsman was on seven and Denly should have been out lbw on 54 but Australia failed to review.

Stokes started his innings slowly but accelerated, reaching his fifty off 89 balls with a huge six off leg-spinner Marcus Labuschagne over wide long-on.

The left-handed batsman is second only to Smith in the combined run-scoring charts over the series, albeit more than 300 runs adrift of the Australian's total of 751.

England are aiming to restore pride even though Australia have already retained the Ashes urn.

The tourists came into the match hungry to wrap up their first series victory in England since 2001 after winning last week's fourth Test to take a 2-1 lead but that looks increasingly unlikely.

Burns and Denly put on 54 for the first wicket―the highest opening stand of the series for either side―after surviving a torrid four over on Friday evening during which they scratched nine without loss and had Denly dropped by Marcus Harris.

The Australian opener split the webbing in his left hand in the drop and did not take the field on Saturday. He required stitches but is expected to bat.

Off-spinner Lyon struck in his third over when Burns bottom-edged a short ball outside off-stump, with wicket-keeper Tim Paine taking the catch.

Root also fell in tame fashion, edging Lyon to Smith at slip for 21 to leave England 87/2 in the 28th over.

Jofra Archer put England in pole position on Friday, taking six wickets to bowl Australia out for 225, giving the home side a useful first-innings lead of 69.

Smith top-scored with 80 to take his tally for the series to 751 runs in just six innings.