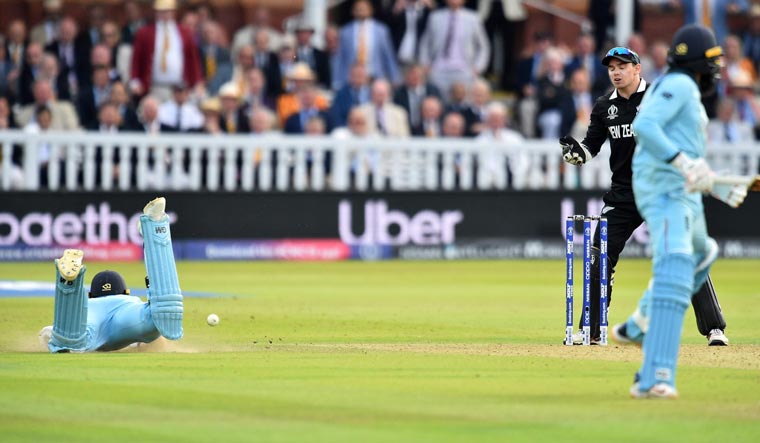 The ball hits England's Ben Stokes (left), deflecting to reach the boundary as he dives to make his ground while Adil Rashid (right) and Tom Latham (centre) look on during the 2019 World Cup final at Lord's | AFP

In a final where the winners were chosen by the slightest of margins, a seemingly innocuous umpiring misjudgement may well have been one of the deciding factors.

In the ICC World Cup 2019 final, England edged out New Zealand on boundary count after the 50 overs and Super Over ended in a tie. In the last over of the regular game, bowled by Trent Boult, with England needing nine runs off three balls, Ben Stokes played the ball towards mid-wicket and set off for two runs with Adil Rashid at the other end. Martin Guptill fired in the throw from the deep to wicketkeeper Tom Latham but it hit the bat of a diving Stokes and went to the boundary.

Umpire Kumar Dharmasena, after consulting with the other on-field umpire Marais Erasmus, signalled six runs—the double that they ran plus the boundary off the overthrow.

The six runs proved to be decisive in the end as England tied the match and managed to hold their nerve to clinch the final in the Super Over.

Now, former umpire Simon Taufel has confirmed to foxsports.com.au that the on-field umpires made a “clear mistake” in awarding six runs to England for the overthrow when it should have been only five.

According to ICC's laws, Law 19.8 pertaining to ‘Overthrow or wilful act of fielder’ states that, “If the boundary results from an overthrow or from the wilful act of a fielder, the runs scored shall be any runs for penalties awarded to either side, and the allowance for the boundary, and the runs completed by the batsmen, together with the run in progress if they had already crossed at the instant of the throw or act.”

The last part is what kicked up the row. The footage of the incident clearly shows that when Guptill released the ball, Stokes and Rashid had not crossed over for the second run. Even when the ball hit Stokes's bat, Rashid was far away from the crease.

Which means they had effectively completed only one run and so, they should have been awarded five and not six runs.

Also, as Taufel pointed out, then Rashid, and not Stokes, would have been on strike with three runs needed to win off two balls for England.

The winner of five consecutive ICC Umpire of the Year awards, however, defended the on-field umpires. “In the heat of what was going on, they (umpires) thought there was a good chance the batsmen had crossed at the instant of the throw,” Taufel said.

“Obviously, TV replays showed otherwise. The difficulty you have here is you (umpires) have to watch batsmen completing runs, then change focus and then watch for the release [of the throw]. You also have to watch where the batsmen are at that exact moment.”

Though Taufel admitted the umpires' call “influenced the game”, he said it would be unfair on both the teams and the umpires to say it decided the outcome of the match.

New Zealand were at the receiving end of a couple of other contentious umpiring decisions. In the New Zealand innings, Ross Taylor was given out when replays suggested that the ball was missing the stumps. The Kiwis had used up the review by then and so couldn't use the DRS.

When England came out for the chase, Boult trapped opener Jason Roy LBW only for Erasmus to rule it not out. New Zealand rightly took the DRS, but the on-field decision stood as the third umpire ruled in favour of 'umpire's call'.