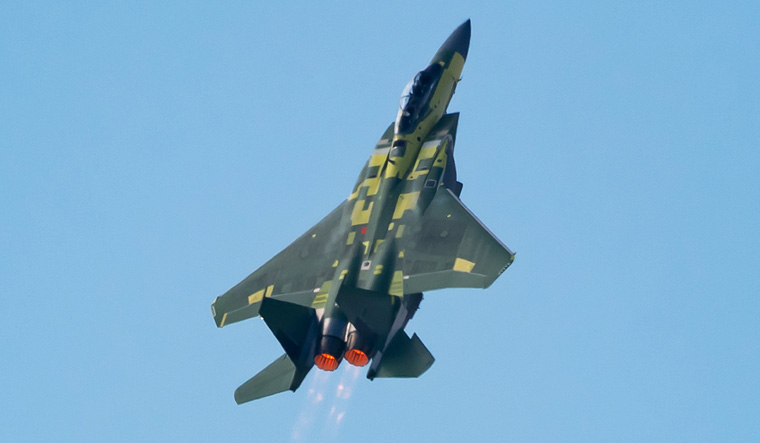 Boeing on Tuesday conducted the first test flight of its F-15EX fighter, which is being built for the US Air Force.

In a press release, Boeing said the F-15EX jet "took off and landed from St. Louis Lambert International Airport, completing a 90-minute test flight..." The F-15EX has been offered to India and Israel.

The F-15EX is the newest variant of the iconic F-15 'Eagle' air superiority fighter, which first flew in 1972 and remains a mainstay in the air forces of the US, Israel, Saudi Arabia and Japan. The US, Israel, Saudi Arabia, South Korea, Singapore and Qatar all operate or are buying multi-role variants of the F-15 that can perform both air-to-air and air-to-surface missions.

Last year, Boeing was awarded a US Air Force contract for eight F-15EX jets. The US Air Force may buy up to 144 F-15EX fighters with an eventual contract value of about $23 billion. The deal for the F-15EX by the US Air Force had created a flutter as the US was buying a version of a fighter that had been in service for five decades.

Boeing describes the F-15EX as the most advanced version of the F-15 to date, with features including new cockpit displays, fly-by-wire technology and electronic warfare systems.

The F-15 has always been highly rated for its agility and prowess in both close-range dogfights and long-range air-to-air engagements. F-15s of the US, Saudi and Israeli air forces have shot down over 100 enemy fighters in the past five decades; Boeing claims no F-15 has been shot down in air-to-air combat. F-15s are believed to have shot down MiG-21s, MiG-25s and MiG-29s among other jets in air wars over Lebanon, Iraq, Kosovo and Bosnia.

The multi-role versions of the F-15 have a heavy bomb load and long range. Boeing touts the F-15EX as having an external payload of over 13 tonnes, the highest among all fighters on offer to the Indian Air Force for its 114-jet tender.

Last week, Boeing announced that the US government had granted the company a licence to offer the F-15EX to the Indian Air Force for a prospective contract for 114 fighters, valued at about $15 billion.

On Tuesday, Boeing announced “The US and India have held discussions on F-15EX fighter jets and the two respective air forces have exchanged information about it”.

Jeff Shockey, vice president, Global Sales and Marketing, Boeing Defense, Space & Security and Boeing Global Services, explained to PTI the benefits of the US buying the F-15EX to an Indian contract. "It [US commitment] certainly sends a powerful signal when the US government makes a commitment to a platform like this that they’re in it or the long haul and are showing faith and confidence in the capability and price point of the F-15EX– piques interest in the US and around the world," Shockey said.

Boeing is displaying a model of the F-15EX at the ongoing Aero India air show in Bengaluru.