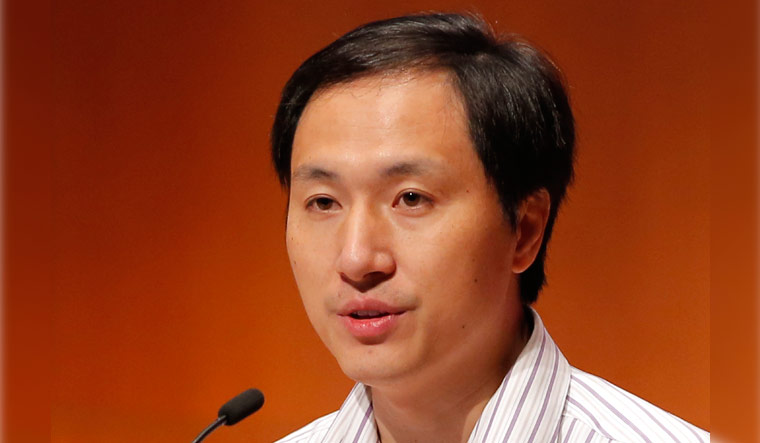 File photo of He Jiankui, a Chinese researcher, speaking during the Human Genome Editing Conference in Hong Kong, where he made his first public comments about his claim to have helped make the world's first gene-edited babies |AP

Three years in prison and a three million yuan (Rs 3.07 crore) fine is the punishment meted out to the Chinese scientist who claimed to have made the world’s first genetically-edited babies, after he was given his sentence on Monday by Chinese authorities.

He Jiankui, a  former associate professor with the Southern University of Science and Technology, was convicted of illegal medical practice, as were two of his associates, Zhang Renli and Qin Jinzhuo. The verdict, by the Nanshan District People's Court of Shenzhen, stated that all three were not qualified to work as doctors, and that they had knowingly violated China’s regulations and ethical principles to practise gene editing in assisted reproductive medicine, according to Xinhua.

The three were accused of doing what they did "in the pursuit of personal fame and gain" and of having seriously "disrupted medical order".

He made headlines when he claimed that he had created the world’s first genetically-modified ‘designer babies’, the twins Lula and Nana, who were born in November 2018. Jiankui’s actions were condemned across the world, as scientists accused him of fundamentally violating scientific ethics.

Using the CRISPR-Cas9 gene-editing tool, He altered the genomes of embryos with the aim to disable the CCR5 gene which is used as a pathway to the human body by the HIV. Some of these embryos were then used to generate pregnancies using In-Vitro Fertilisation (IVF).

He said that eight couples enrolled in his study, each with an HIV-positive potential father. According to the court, three genetically-edited babies were born.

While He claims that the move was to help make the babies resistant to strains of HIV, his research may have had unintended consequences. New research found that people who naturally had the mutation that He was trying to create were more likely to die young, as they had reduced resistance to diseases like influenza.

In addition, the genomic changes may have had an effect on their brains, as other research has found that deleting CCR5 could improve a person’s memory retention and ability to recover from strokes. However, the cognitive impacts of this on a human being are not yet fully understood.

He has not claimed that the tried to make the babies smarter. Speaking at the International Summit on Human Genome Editing, He said he was against using genome-editing for enhancement.