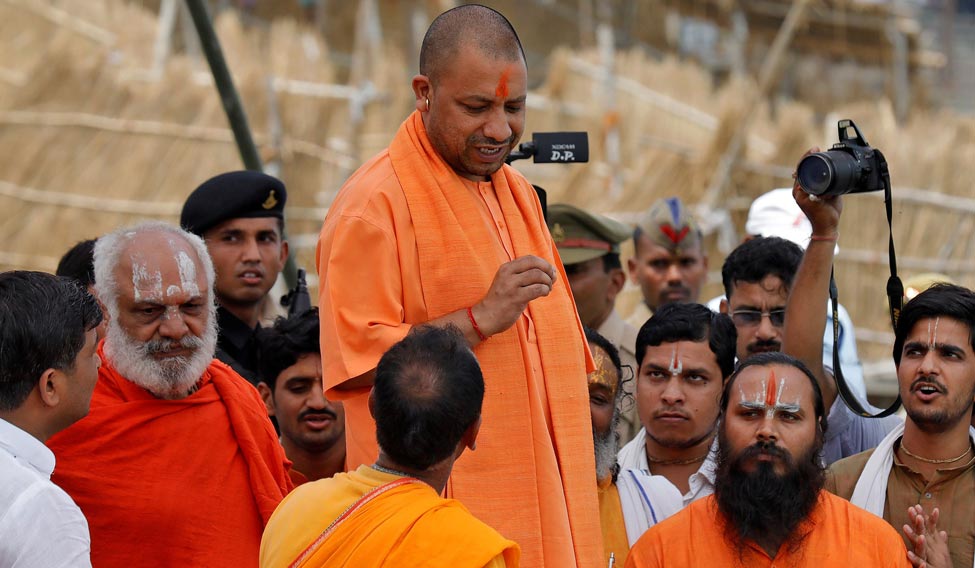 The poll plank of the BJP for the last Uttar Pradesh assembly elections focused on how it wanted to fight corruption and usher change and development in the underdeveloped state and give a new fillip of hope and opportunity to its people. They won with an admirable two-thirds majority, almost decimating the opposition.

Seven months later, the people in the state who have suffered for years with bad politics dictating their lives, see that a saffron agenda is what is defining the Yogi Adityanath government.

The poster boy of Hindutva in the state who was a priest-turned-politician was a surprise choice as chief minister. Even BJP leaders were taken aback. The Vishwa Hindu Parishad and the Rashtriya Swayamsevak Sangh were however pleased to see politics shape up the way they wanted as Adityanath, the chief priest of the Gorakhnath temple, was clearly their choice.

In his single-minded thrust to push the Hindutva agenda, the saffron draped monk has now declared Vrindavan and Barsana as pilgrimage sites. Vrindavan, with nearly 5,000 temples, is believed to be the place where Lord Krishna had grown up. Barsana is where his childhood friend, Radha, grew up. There are numerous colourful legends around both places.

What does this effectively mean? It means that non-vegetarian food and liquor cannot be served nor sold in these designated areas.

Obviously, it will push a lot of Muslims into unemployment as they singularly are into the meat business. As they would slide into consequent poverty, they will be forced to leave these towns to make a living.

Clearly, in course of time, more cities would get the pilgrimage tag. Hindutva activists are now demanding that Mathura be also declared as a pilgrimage site.

Sources indicate that actress-turned-politician and BJP MP from Mathura, Hema Malini, who has a mass appeal due to her histrionics in Bollywood films, is also demanding that the entire Braj region to be similarly declared as a religious shrine. The Braj region encompasses around 80km and has a fairly large Muslim population.

There are indications that other areas that may get the pilgrimage tag are likely to be Nandgaon, Gokul and Govardhan.

Obviously, all these moves are cleverly being engineered and vocalised keeping in view the upcoming civic elections starting on November 22. It will be an indicator of what people think of the BJP which has captured power in Uttar Pradesh after 15 years.

Already, there has been much hype over other polarising mechanisms in the form of whipping up passions over love jihad concerning inter-religious marriages, ghar wapsi that is related to reconversions back to Hinduism and moral policing that discourages young unmarried couples from moving around in public spaces.

It is not designating cities as pilgrimage sites alone that is being done by 44-year-old Adityanath who is seen as one of India’s youngest chief ministers. He has ensured that school bags distributed to students in government schools are orange. He has recently flagged off a series of new state transport buses painted saffron. His chair at both his office and residence is draped in saffron and now, he is getting the chief minister’s office painted in his favourite colour that symbolises his political affiliation.

Adityanath spent his Diwali in Ayodhya last month clearly signalling the importance of the place where he is aggressively advocating the building of the Ram temple. He has nursed controversy for many years now. The BJP is wary of his influence and so does not crack down on him even if they do not agree with his views or style of functioning.

In 2002, he set up the Hindu Yuva Vahini, a right-wing outfit. Earlier, its activities that largely dealt with advocating the idea of Hindutva, was limited to Gorakhpur where Adityanath operated from. But now, it is growing elsewhere in the state and is making itself heard and discussed due to its aggressive cow vigilantism.

Of late, there have been many avoidable communal incidents involving the Vahini supporters. Donning saffron scarves, Vahini supporters aggressively push the Hindutva agenda in the countryside.

RSS leaders are worried with this as the BJP has to face general elections in another two years and do not see the growth of another Hindu outfit as a healthy one as it competes for attention.

Will just a saffron agenda help Adityanath to muster support in the next parliamentary elections and the state elections in another four and a half years? Most unlikely. Just closing down illegal slaughter houses is not enough. He will have to perform as his party was largely voted for change as the populace was fed up with the regional politics of Mulayam Singh Yadav’s Samajwadi Party and Mayawati’s Bahujan Samaj Party as both got embroiled in governance issues.

With his massive waiver of Rs 36,000 crore for small and marginal farmers, the exchequer is struggling to live up to the challenge of diverting money for development.

However, he has recently shown that he can take tough decisions like voluntarily retiring numerous top officials who were tainted with corruption charges. He will have to do much more and whip in a new culture in the state where it is not easy to get things done.

A White Paper released by him two months ago does not inspire any confidence. It mostly deals with how previous governments failed. We all know that. What he should have done is provide his new vision and dynamic thinking.

Seven months is not a long time in governance especially by a party that has not been in power for long. But it is enough to provide pointers on the shape of things to come. And, that does not seem promising.

UP is not an easy state to govern. It is known for rampant corruption, caste wars, misogyny, sluggish bureaucracy, narrow politics and poor development indices like health and education.

Adityanath has to change all that if he has to make good all the promises his party made before the elections.

Your form could not be submitted.
This browser settings will not support to add bookmarks programmatically. Please press Ctrl+D or change settings to bookmark this page.
Topics : #Yogi Adityanath