Over one lakh loudspeakers have been brought down: Yogi Adityanath 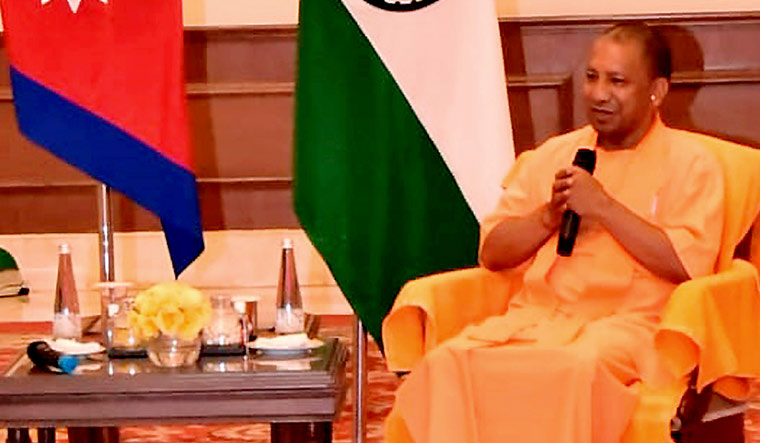 Uttar Pradesh Chief Minister Yogi Adityanath on Saturday said over one lakh loudspeakers have been brought down so far in the state and asked officials to ensure that the removed sound systems are not installed again.

Reviewing law and order in the Bundelkhand region of the state, the chief minister also expressed displeasure over the Lalitpur incident involving the alleged rape of a 13-year-old rape victim by the Pali police station's SHO and sought a reply from the district police chief.

After holding discussions with people's representatives and reviewing development works here, Adityanath said more than one lakh loudspeakers have so far been removed in the state and the dislodged ones must not be installed again, an official spokesman said.

"Religious events should be confined within the premises of religious places. No festival should be organised on roads and these events should not cause any inconvenience to the common citizens," the CM said.

The campaign to remove illegal loudspeakers installed at religious places in the state and limit the sound of other loudspeakers to the permissible decibel limit started on April 25.

Illegally installed loudspeakers were removed from all religious places without any discrimination.

All loudspeakers which were installed without permission from the administration were kept in the category of illegal.

Additional Director General of Police (Law and Order) Prashant Kumar had earlier in a statement that illegal loudspeakers were removed without any discrimination and that the orders of the Allahabad High Court too were followed during the process.

Besides holding the divisional level review meeting in Jhansi, Chief Minister Adityanath also visited the Babina development block to check the ground reality of the implementation of the drinking water scheme and asked officials to complete the development work in time.

He also said that FIRs should be lodged against the companies which do not complete their work in time, the spokesman said.

He also stressed the need to take strict action against the land grabbers and maintain law and order.

While reviewing the projects and development works and law and order in Jhansi, Lalitpur and Jalaun districts, Yogi said the state government is committed to benefiting the people of the state through development and public welfare schemes.

He warned that in case of negligence and apathy at any level, the accountability will be fixed.

While reviewing the Amrit Drinking Water Scheme under the Jal Jeevan Mission, an ambitious project for the Bundelkhand region, he said the progress of the second phase of the scheme is not satisfactory and directed blacklisting of the concerned company and lodging of a complaint against it.

Adityanath also expressed displeasure over the law and order situation and expressed deep dissatisfaction over the Lalitpur involving the rape of a rape victim in the police station.

Seeking a report from the Lallitpus SP, he also expressed strong displeasure over the belated action in the crime by policemen.

The SHO of the Pali police station has already been suspended and arrested and remanded in judicial custody for allegedly raping the minor girl in the police station.

So far, all the six accused, including a woman, have been sent to jail in this case.

Apart from this, an incident of thrashing of a maid by policemen at the official residence on suspicion of theft in the Mehrauni area of Lalitpur has also come to light recently in which a case has been registered against a constable and his wife.

After beating the maid, the constable took her to the police station and handed her over to the female sub-inspector, who also beat her up.

An FIR was lodged at the Kotwali police station on Wednesday after the victim's relatives staged a sit-in outside the police station.

In this connection, a case has been registered against constable Anshu Patel and his wife and the constable and the female sub-inspector have been suspended for misbehaviour.