Within 15 days, fodder banks will be made in all 75 districts 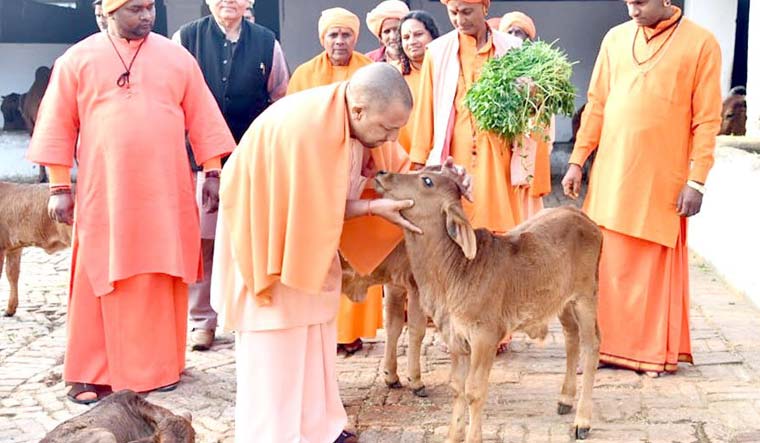 The ministry of animal husbandry in Uttar Pradesh has a plan in place to tackle the stray cattle menace within one year.

Within this, is a 100-day plan in which the basics will be looked into. Thus, within 15 days, fodder banks will be made in each of the 75 districts. Even peoples' representatives have been asked to donate to these banks. The aim is to have a fodder bank that can serve cattle for one whole year.

Minister in-charge Dharampal Singh has said that he will rectify the problems he has identified in the various cow shelters—for example, lack of cover to protect from heat and rains. He is asking for individuals too to make contributions in kind, so that shelters can be built at every block as well. In addition, those desirous of buying cow dung (at Rs 1.5 per kg to produce compressed natural gas) will also be linked to the gaushalas.

Grazing grounds within every village will be identified and where these have been encroached, the ground will be cleared by the district magistrate. Once vacated, the department will build cow safaris. While one part of the land will have a grazing area, the other part would be open. Sales of milk, cow dung and cow urine will be made.

The department will also give one murrah buffalo to each farmer. Such cows produce 20-25 litres of milk a day. This will help improve the farmers' economic status.

Myth and religion collude to give the cow an exalted place in Hinduism. The state’s first act for protection of cows was passed in 1955; stricter provisions were added to it in June 2020. This included charging even owners of vehicles used to illegally ferry cows for slaughter and making them pay for maintenance of seized animals. Chief Minister Yogi Adityanath had said that only hailing the cow as divine would do nothing to protect her. And thus the need for harsh provisions, which also prescribed punishments for those who endangered the animal by not providing adequate food and water.

According to the government’s data, there are over 5,000 cow protection centres in the state that cater to the well-being of over 5 lakh cattle. But there are many flaws in this claim. One, there is just a provision of Rs 30 per animal housed in a shelter. Experts said that this amount should at least be doubled to meet the nutritional needs of cows. Two, the food for the strays in these shelters was to come from common grazing lands in villages. But in most villages, this land has been leased out for private use. Thus, there are no grazing areas for the cows, causing them to wander into people’s fields and destroy standing crops.

Munna Lal Shukla, a Right to Information activist, was Socialist Party of India candidate from Sandila, Hardoi district. He has been leading a movement to get stray animals to shelters, so that they cause no harm to crops and humans. Since December 2020, he had led about 1,000 cows to shelters. But in January 2021, the police booked him for disturbing peace and he also got into skirmishes with BJP leaders. “They made use of the cow only as an issue, but did not know what to do about it,” said Shukla. “The blame has now come to rest on common folk for letting their animals go once they no longer produce milk.”

Clearly taming cows and making adequate arrangements for them is and must be a priority area for the government.