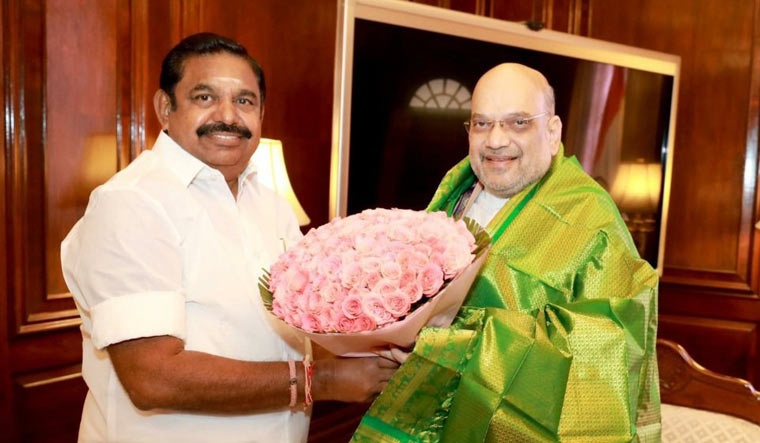 “We did not talk politics. It was a courtesy call,” Palaniswami told media after the meeting. He said that he had submitted a memorandum and requested the Centre to implement the long pending Nadanthai Vaazhi Cauvery river link project to solve the drinking water problem in several districts of Tamil Nadu.

“We requested the implementation of this project to restore the Cauvery and its tributaries," Palaniswami said. He also alleged that the law and order in Tamil Nadu has deteriorated. “The DMK has failed to curb the drug menace in the state. The availability of ganja and other narcotics substances have increased in the State. We have mentioned these also (in the meeting).”

Accusing the DMK government of increasing the electricity tariff in the state, Palaniswami said the increase in tariff at a time when the people are slowly limping back from the effect of the pandemic was unnecessary.

The AIADMK leader, however, refused to comment on the internal power tussle within the party. When asked his opinion about O. Panneerselvam’s state wide tour, he said, “ I have visited 20 districts and organised protests against electricity tariff hike.”

Palaniswami, accompanied by former ministers S.P. Velumani and C. Ve Shanmugam, was all smiles after his 20-minute long meeting with Shah. Sources in the AIADMK said that EPS submitted a list of documents to the home minister against the ruling DMK in the state. He also briefed Shah about the DMK government registering a slew of corruption cases against the former AIADMK ministers. Velumani, Dr C. Vijayabhaskar and several other former ministers are in the DVAC radar after the DMK came to power in the state.

Sources in the AIADMK said that EPS got the appointment with Amit Shah through the BJP leaders in Tamil Nadu. It may be recalled that Palaniswami, during the farewell party to then President Ramnath Kovind, had gone to Delhi along with state BJP chief K. Annamalai.

However, Palaniswami’s first visit to Delhi after taking charge as the interim general secretary of the party assumes significance in the backdrop of his ongoing power tussle with OPS and the latter refusing to give up the fight. It may be recalled that when Prime Minister Narendra Modi came down to Chennai for the Chess Olympiad, EPS welcomed him and OPS went to send him off at the airport.