One person has been confirmed killed, several feared trapped 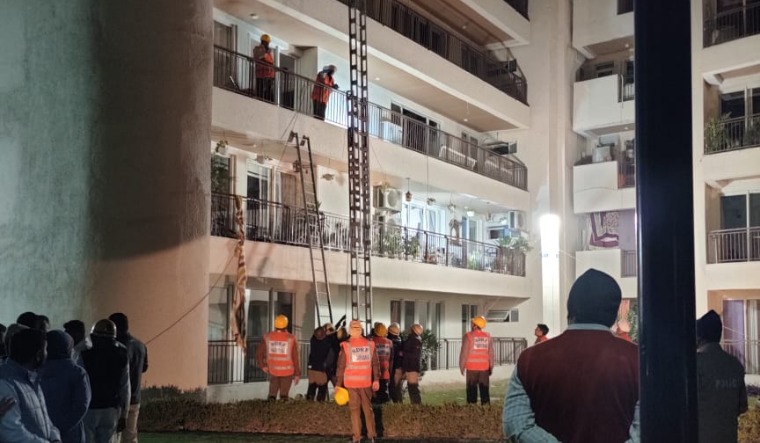 Personnel from the National Disaster Response Force and Haryana state disaster response force were continuing search operations on Friday morning at an apartment complex in Gurugram where a roof of a building had collapsed.

At least one person has been killed and several are feared trapped after a portion of the roof of an apartment at the Chintels Paradiso Housing Complex in Sector 109 of Gurgaon collapsed.

News 18 reported one person had been rushed to hospital and “6-7 people are feared trapped under debris”.

Deputy Commissioner Nishant Yadav told mediapersons on Thursday night construction work was under way on the sixth floor when the floor collapsed. He said third to sixth floors of the building were vacant and people were living on the first and second floors.

Yadav said a detailed inquiry would be ordered into the incident by the administration on Friday morning and action would be taken against those responsible if any lapses were found.

Local residents said Tower D, part of which collapsed, was built in 2018. The complex has three other towers. The 18-floor Tower D has four-bedroom apartments.

The housing complex management blamed the disaster on “negligence” during repairs for the “extremely unfortunate incident”, which took place around 7pm on Thursday.

“Upon preliminary investigations, we have come to know that some negligence in repair work done by the contractor in an apartment led to this incident,” it said, offering condolences to the “affected families”.