These will replace the IAF’s ageing fleet of Avro planes 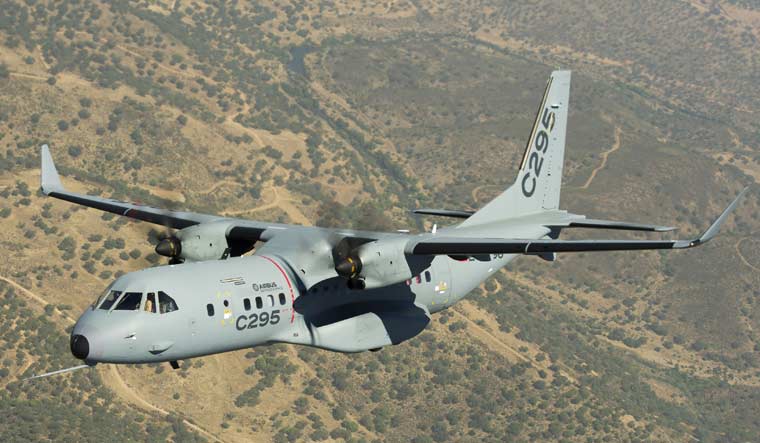 The Ministry of Defence on Friday signed the much-awaited contract for 56 C-295 transport aircraft to replace the ageing fleet of Avro planes with the Indian Air Force.

Estimated deal of worth Rs 22,000 crore was signed with M/s Airbus Defence and Space, Spain. While 16 aircraft will be delivered in flyaway condition within 48 months, 40 jets will be manufactured in India by Tata Group within 10 years.

This is the first project of its kind in which a military aircraft will be manufactured in India by a private company.

The IAF has been struggling for long to replace its fleet of Avro transport planes, as they were procured in the 1960s. The Request for Proposal (RFP) was issued to global firms in May 2013 and the deal was first approved by the Defence Acquisition Council in May 2015 after Airbus and Tata Group came out as sole bidders. But, after that, the project was stalled for years and earlier this month, Prime Minister Narendra Modi-led cabinet committee security gave its go-ahead to the deal.

Ratan Tata, Chairman Emeritus, Tata Sons, while congratulating Airbus Defence, Tata Advanced Systems Limited and the Indian Defence Ministry, said," The clearance of the joint project with Airbus defence and Tata advanced system to build the C-295 is a great step forward in the opening up of aviation and avionics projects in India."

All the IAF C-295s will be handed over in transport configuration and equipped with an indigenous Electronic Warfare Suite.

“This contract will support the further development of India’s aerospace ecosystem, bringing investment and 15,000 skilled direct jobs and 10,000 indirect positions over the coming 10 years,” said Michael Schoellhorn, CEO of Airbus Defence and Space.

“The C-295 has proven again as the segment leader, and with the addition of India as a new operator, the type will enlarge its footprint even more, not only on the operational aspects but on its own industrial and technological development,” he added.

According to the Ministry of Defence, the contract with Airbus Defence and Space through which Airbus will discharge its offset obligations through direct purchase of eligible products and services from Indian Offset Partners.

After completion of the delivery, the subsequent aircraft manufactured in India can be exported to countries which are cleared by the Government of India. The project will give a boost to aerospace ecosystem in India wherein several MSMEs spread over the country will be involved in manufacturing of parts of the aircraft. The programme will also involve development of specialised infrastructure in the form of hangars, buildings, aprons and taxiway.

Defence officials claim that the induction of C-295MW will be a significant step towards modernisation of the transport fleet of the Indian Air Force. It is a transport aircraft of 5-10 tonne capacity with contemporary technology. Powered by the Pratt & Whitney PW127 engines, C-295MW aircraft has a rear ramp door for quick reaction and para dropping of troops and cargo.

"The aircraft will give a major boost to tactical airlift capability of IAF, especially in the Northern and North-Eastern sector and Andaman & Nicobar Islands," said an IAF official.

Airbus claims that the with a proven capability of operating from short or unprepared airstrips, the C-295 is used for tactical transport of up to 71 troops or 50 paratroopers, and for logistic operations to locations that are not accessible to current heavier aircraft. And, the IAF becomes the 35th C-295 operator worldwide, with the programme reaching 278 aircraft, 200 of which are already in operation and have booked more than half a million flight-hours.