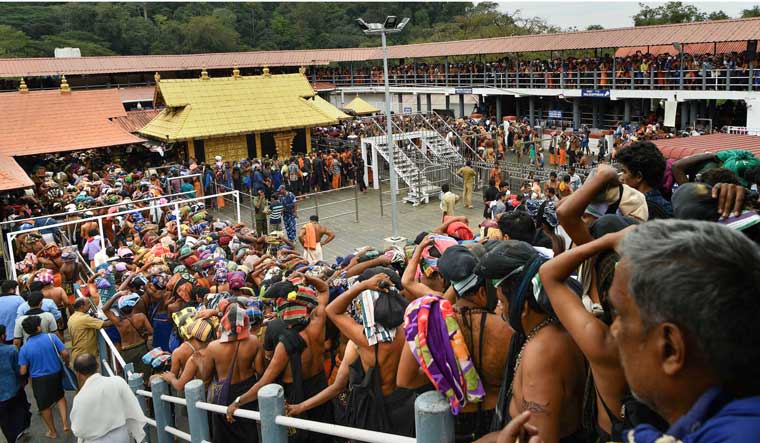 Ahead of state assembly polls, the Congress-led United Democratic Front in Kerala said on Saturday that if the UDF was voted to power, it would pass a legislation on Sabarimala to protect the customs of the shrine, a move dubbed by the ruling Left front as to "fool the people of the state". Senior Congress leader and MLA Thiruvanchoor Radhakrishnan "released a draft law", saying it would be passed if the UDF comes to power after the elections.

"We will enact the law if we come to power. Under this proposed law, the ban on unauthorised entry into Sabarimala will be ensured in consultation with the tantri. Violation of customs/rituals can attract imprisonment of up to two years," Radhakrishnan told reporters at Kottayam.

The Congress had recently asked the Left government to seek legal remedies to "heal the wounds" created in society due to its alleged "hasty decision" to implement the Supreme court verdict of September 2018 allowing women of all age groups to enter the Lord Ayyappa shrine at Sabarimala.

The southern state had witnessed protests by right wing and BJP workers against allowing women in the banned 10-50 age group being allowed in the shrine.

Numerous review petitions are pending in the apex court.

However, CPI(M) state secretary in-charge A. Vijayaraghavan claimed the UDF was fooling the people as it was not possible to formulate a law in a matter which is under the consideration of the Supreme Court. "The UDF announcement that a new law will be formulated against the women's entry into Sabarimala is just to fool the people of the state. First of all, the UDF is not going to come back to power."

"Secondly, it's not possible to make a law in a matter which is under the consideration of a larger bench of the Supreme Court. There is no legal authority to do so," Vijayaraghavan said. The "draft law" proposed by the UDF contains entry restrictions with the permission of the temple tantri (priest).

Vijayaraghavan said the state government will act according to the decision of the Supreme Court and claimed the new announcement was part of the UDF agenda to fool the people.

On Friday, Chief Minister Pinarayi Vijayan had said the UDF was raking up the Sabarimala issue because of the coming assembly elections.