Women should be allowed to go anywhere, says the Congress president 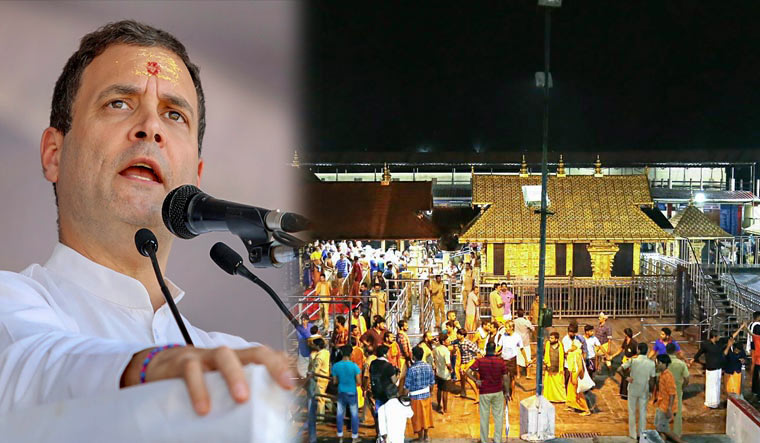 Congress president Rahul Gandhi on Tuesday said he was in favour of allowing women of all ages to enter the Lord Ayyappa temple in Sabarimala, putting the party's Kerala unit on the defensive. Rahul's comment has contradicted the Kerala Pradesh Congress Committee's decision to rally behind the devotees who have been protesting against the recent Supreme Court order lifting the ban on women between 10 and 50 years inside the temple.

“My stand is against the party's stand. Men and women are equal. Women should be allowed to go anywhere they want,” Rahul said. He, however, added that the party's Kerala unit is supporting the devotees as it is an emotional issue.

KPCC president Ramesh Chennithala claimed there was no confusion in party's stand over the issue, saying Rahul has allowed the state unit to take its own decision.

The hill shrine had witnessed high drama after around a dozen women in the 10-50 age group were prevented by protesting devotees from entering it after the temple doors were opened for monthly poojas between October 17 and 22.

The temple's three month-long pilgrim season is commencing from November 17 and the state government has reiterated that all devotees will be allowed to offer prayers at the shrine. The temple will also open for a day on November 5 for a special pooja.

Meanwhile, Kerala police have arrested over 3,500 people and registered 529 cases in connection with the protests and demonstrations against the implementation of the Supreme Court verdict.

On September 28, the apex court lifted the centuries-old ban on the entry of women of menstrual age into the shrine. The verdict sparked off widespread protests across Kerala with thousands of devotees, mainly women, hitting the street. The protests and demonstrations were anchored on strong sentiments against the ruling Communist Party of India (Marxist). Both the Congress and the Bharatiya Janata Party have lent support to the agitation against the apex court verdict.