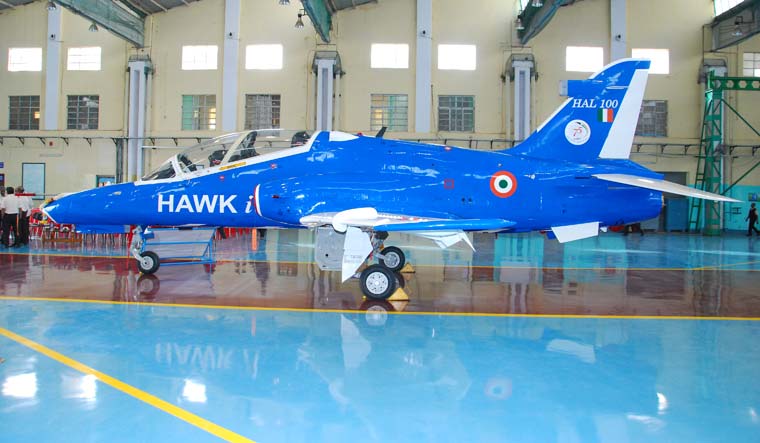 For several years now, the Indian Air Force has been battling both a fall in fleet strength and budgetary constraints. To meet the shortfall in combat aircraft while not emptying coffers, HAL has been proposing a 'low cost' home-built solution: Arming the Indian Air Force's fleet of over 100 Hawk advanced jet trainers. The Hawk is designed to be capable of carrying up to 3 tonnes of weapons or fuel under its wings or fuselage.

As part of this initiative, HAL developed the 'Hawk-i' upgrade of the Hawk. This internally funded upgrade of the Hawk was intended to transform the aircraft from a trainer providing training with sensors and weapons in peacetime into a potent combat platform during conflict. Arun Jaitley dedicated the Hawk-i to the nation when he was defence minister in 2017.

While the Indian Air Force has yet to sign any contract to arm its Hawk trainers, on Thursday, HAL announced the Hawk-i had test-fired an anti-airfield weapon.

In a press release, HAL said the Hawk-i test-fired the Smart Anti Airfield Weapon (SAAW) off the coast of Odisha on Thursday. HAL claimed the SAAW is the first smart weapon fired from an Indian Hawk.

“HAL has been focusing on the Atmanirbhar Bharat campaign. The company-owned Hawk-i platform is being extensively used for certification of systems and weapons developed indigenously by DRDO and CSIR labs” said Mr. R. Madhavan, CMD, HAL. HAL announced it is in discussions with the Indian armed forces for integration of various weapons on the Hawk. The Indian Navy also operates the Hawk to train its pilots.

The SAAW is an aircraft-launched, advanced, precision strike weapon weighing 125kg. It is used to attack and destroy enemy airfield assets such as radars, bunkers, taxi tracks and runways within a range of 100km. SAAW has been previously successfully test fired from Jaguar aircraft.

In 2019, a British aviation website reported HAL was looking to integrate two British-origin weapons—the Advanced Short Range Air-to-Air Missile (ASRAAM) and the Brimstone air-to-surface missile—on the Hawk and other fighters of the Indian Air Force.

Integration of weapons such as the SAAW, ASRAAM and Brimstone would give the Indian Air Force's Hawk fleet considerable potential to engage in combat, while having low operating costs. The Hawk is a British-designed aircraft, which was built under licence in India.