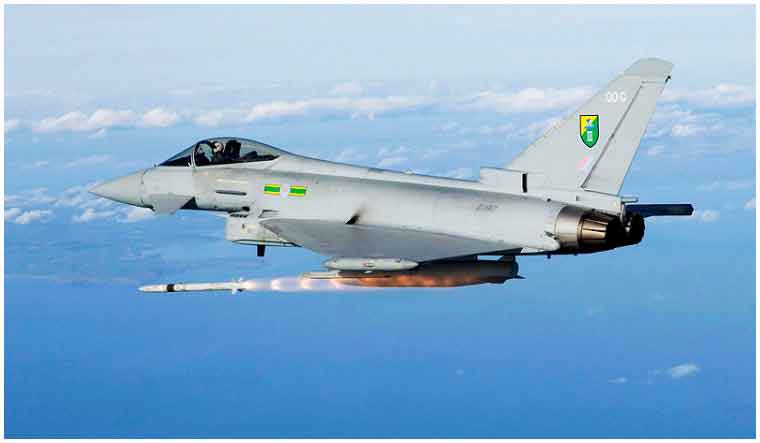 Hindustan Aeronautics Limited (HAL) is looking to integrate an air-to-air missile designed in the UK on three aircraft of the Indian Air Force (IAF), an international aviation news website reported on Friday.

Flight Global reported that HAL is seeking to integrate the Advanced Short Range Air-to-Air Missile (ASRAAM) on the Hawk advanced jet trainer, the indigenous Tejas and the Su-30MKI. The ASRAAM, which was designed in the UK, is built by the European defence conglomerate MBDA. The ASRAAM was ordered by the Indian Air Force for its Jaguar strike fighter fleet in 2014 in a contract worth approximately $248 million.

The ASRAAM is an infrared-homing missile that tracks a target by locking on to its heat signature. The MBDA website describes the ASRAAM as a “within-visual range dominance weapon” with a range “in excess of 25km”.

Flight Global reported “HAL is in discussions” with the Indian Air Force for integrating the ASRAAM on the MK1A variant of the Tejas. Last year, the Indian Air Force had committed to buying 83 Tejas MK1A jets, but a firm order has not been placed yet. The Tejas MK1A has improved electronics and radar systems compared with the baseline Tejas fighters.

Flight Global quoted MBDA as saying “Fitting ASRAAM to Tejas would be consistent with the IAF’s aspiration for ASRAAM to be its fleet-wide short-range air-to-air missile.” During Aero India, MBDA had tweeted, “ASRAAM is the Indian Air Force’s choice as its next generation close combat missile. The world’s fastest dogfighting missile, #ASRAAM has superb range and manoeuvrability... Jaguar will be the first of #India’s aircraft to receive it.”

Flight Global also revealed that MBDA is offering the ASRAAM and Brimstone air-to-surface missile for a modified version of the Hawk built by HAL. The Indian Air Force is the largest export user of the Hawk AJT, operating over 100 aircraft. In recent years, HAL and BAE Systems, the original manufacturer of the Hawk, have offered to modify the aircraft for attack missions.

The Brimstone missile, which has a range of over 20km, had been extensively used by the UK’s Royal Air Force in operations against ISIS in Iraq and Syria and in the 2011 strikes against the Gaddafi regime in Libya. MBDA was quoted by Flight Global as saying, “with Brimstone, a single Hawk has the ability to accurately and easily destroy six tanks simultaneously”.

Flight Global also reported MBDA is keen on manufacturing the ASRAAM in India. Earlier this year, Sasmos Het Technologies, a Bengaluru company manufacturing wiring harness and other products, announced it has supplied its first wiring harness for the ASRAAM. Sasmos already supplies wiring equipment for the MICA, another air-to-air missile built by MBDA.

The MICA is a French-designed air-to-air missile that comes in both radar-homing and infra-red homing variants. Unlike the ASRAAM, the MICA is a medium-range weapon. In 2012, the Indian Air Force announced an order for 493 MICA missiles, in an order worth approximately $1 billion, as part of its contract to upgrade the Mirage 2000 fleet. The MICA will also arm the 36 Rafale jets on order for the Indian Air Force.