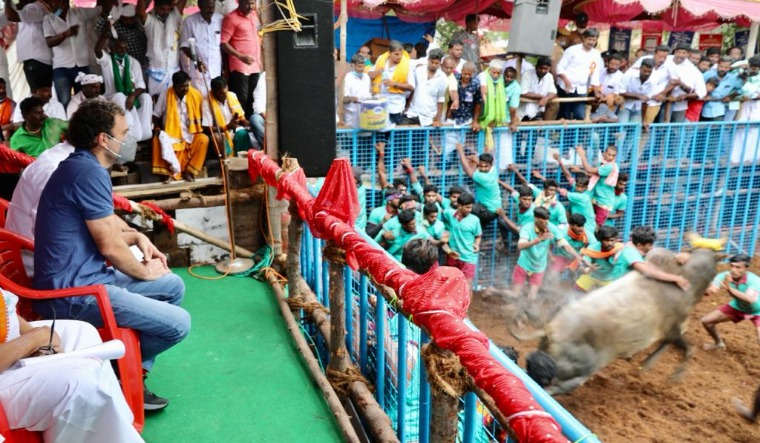 As Tamil Nadu celebrated the popular harvest festival of Pongal, key national figures were in the state.

Jallikattu is held coinciding with Pongal, which heralds the birth of the auspicious Tamil month Thai.

Rahul Gandhi appreciated the Jallikattu event. “It was quite a lovely experience to see Tamil culture, history in action. I'm happy that Jallikattu is being organised in a systematic and safe way that both the bull and the youngsters are safe and everybody is being taken care of,” Rahul was quoted as saying by ANI.

Though Stalin was present at the venue since morning and was not on the same dais that Gandhi occupied along with senior Congress leaders on his arrival, he later joined the Lok Sabha MP and the two were seen having discussions, apparently about Jallikattu.

DMK and Congress are in alliance and are expected to face this year's Assembly polls in Tamil Nadu together.

Alagiri had earlier said Gandhi would lend his moral support to farmers protesting against the new Central farm laws across the country by witnessing the sport at Avaniapuram.

Meanwhile, RSS chief Mohan Bhagwat on Thursday participated in Pongal celebrations in Chennai and made a surprise visit to the house of a functionary of the organisation where he recited a couplet from Tamil classic Tirukkural. He also performed gau puja (cow worship).

Bhagwat taught a couplet on possession of self-restraint from Tirukkural, authored by Tamil savant Tiruvalluvar, to a girl of the RSS functionary's family to whom he paid a surprise visit.

The RSS chief recited the Kural meaning "the wound burnt by fire may heal but not the one by the tongue."

And the girl responded to him by quoting a couplet on gratitude from the Tamil classic.

Videos posted by a senior RSS functionary in this regard went viral on social media.

Earlier, Bhagwat clad in dhoti and with sacred ash (vibuthi) and vermilion (kumkum) smeared on his forehead in lines with the Tamil tradition, offered prayers at Sri Kadumbadi Chinnamman Temple in Ponniammanmedu and participated in community Pongal celebrations.