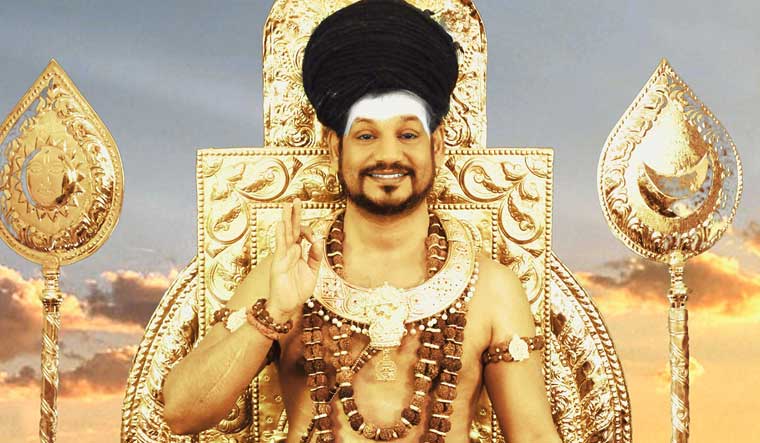 A week ago, a video went viral showing rape-accused godman Swami Nithyananda announcing a three-day visa for his mythical nation of Kailasa, with visitors having to fly in from Australia. Nithyananda later claimed he was planning "for at least 100,000 people settling in Kailasa in next 5 years".

On Tuesday, Nithyananda's official Facebook account released a discourse by him in which he revealed 29 people had applied to live in Kailasa.

"Even day before yesterday, I had a meeting with Ohio sangha and New York sangha... 9 families, 20 people, 9 individuals... Totally 29 people applied to become Kailasavasi, to come and live in Kailasa physically," Nithyananda claimed. Nithyananda has not clearly stated the location of Kailasa or whether it is an actual place itself.

Nithyananda called on the 29 applicants to join his "E-embassy" project. Nithyananda described the E-embassies as a part of Kailasa's e-government. He said the E-embassy was a "Virtual enlightenment ecosystem for all committed Kailasians and Hindu Diaspora worldwide who want to work in a very integrated way with Kailasa."

"The E-embassies are designed to keep the Kailasa ecosystem active, functioning, intense without delusional arrogance... and the life filled with high cortisol level," Nithyananda explained.

Nithyananda claimed these "virtual" embassies would be located in the homes of followers, who would need to dedicate eight hours daily.

Nithyananda declared being part of the E-embassy project was mandatory for those interested in moving to Kailasa. Nithyananda claimed Kailasa offered a "green card" and visa.

Nithyananda also announced he was starting two flagship projects immediately: Nithyanandapedia and Kailasapedia. The two projects appear to be attempts to create Wikipedia-like repositories on Kailasa and Nithyananda.

"Kailasapedia is fundamentally to tell the story of Hinduism, historical background, cultural past, our heritage from the time of Kailasa and till the revival of Kailasa everything," Nithyananda said.

"Kailasapedia will contain complete documentation on how all the Kailasas happened, with all their ups and downs and how it got diluted, destroyed over time. how the revival is happening by the grace of Paramashiva through me by me. So now it will stand forever to the whole world," Nithyananda declared. Nithyananda has frequently compared himself to Paramashiva.

Describing its purpose, Nithyananda said, "Kailasapedia is how the pure science become applied science. Kailasapedia will catalogue the events to educate and enrich the world, historical rise and persecutions we faced from the time of Paramashiva till date."

Explaining the concept of Nithyanandapedia, the godman said “Kailasa's Nithyanandapedia is an effort to capture all the Hindu knowledge and expressions shared by me to have one-stop shop combining all the teachings I have given, which was captured in video form, audio form, textbooks, everything photographs. The greatest contribution to humanity will come from Nithyanandapedia.”