‘Say no to mixopathy’: One million doctors on strike against ‘Ayurveda surgeons’ 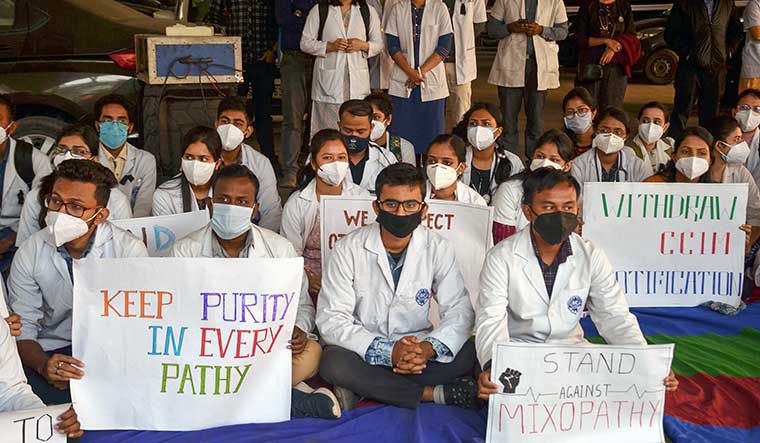 Members of Junior doctors' Association stage a protest in solidarity with Indian Medical Association's strike against Mixopathy. They are demanding the withdrawal of the CCIM notification, at Guwahati Medical College and Hospital (GMCH) in Guwahati, Friday, Dec. 11, 2020 | PTI

Many doctors at several hospitals in the national capital, including AIIMS, on Friday sported black ribbons in support of the protest call of the IMA against the Centre's move allowing post graduate practitioners of Ayurveda to be trained in performing surgical procedures. According to Reuters, around one million doctors across the country participated in the strike, which was called by the Indian Medical Association (IMA).

The IMA, which is demanding the withdrawalof the notification, had given the nation-wide call for a strike of all non-essential services on December 11 for a 12-hour period. Essential services, such as those for COVID-19 care, were still offered.

Indian Medical Association demands withdrawal of the notification of the amendment regulations of Postgraduate Ayurveda Education; IMA says, "It is nothing but a blatant attempt at mixopathy and khichadification of medical education and practice." pic.twitter.com/pXQxazGlFf

The Resident Doctors Association of AIIMS-Delhi, in a statement said, "This step will not only encourage already rampant quackery, but also undermine the safety of public. We request the government of India to retract this notification immediately".

"We stand with our medical fraternity in this regard and support the strike called by Indian Medical Association," it said.

In a video, the IMA asked how Ayurvedic surgeons would ensure anasthesia for their patients, handle complications during surgery or surgical emergencies.

Shivaji Deb Barman, president of FORDA, an apex bodies of various RDAs in Delhi, said, doctors in Delhi will observe black ribbon protest, but "will not withdraw any services".

The IMA has given a call for withdrawal of non-essential and non-COVID services between 6 am and 6 pmon Friday to protest against the notification.

The notification by the Central Council of Indian Medicine (CCIM) to allow legal practice of surgeries by Ayurveda practitioners and the formation of four committees by NITI Aayog forintegration of all systems of medicine will only lead to "mixopathy", the IMA has said.

Earlier, the AYUSH ministry had defended the notification, saying it was a clarification of the relevant provisions in the previously existing regulations of 2016 and that the use of modern terminology in the said notification does not amount to "mixing" of Ayurveda with conventional (Modern) medicine.

"Since beginning, Shalya and Shalakya are independent Departments in Ayurveda colleges, performing such surgical procedures."

"The present clarification was issued in overall public interest by CCIM by bringing the said details into the regulation. Hence this does not signify any policy shift," it stated.

The ministry also said, "All scientific advances including standardized terminologies are inheritances of the entire mankind. No individual or group has monopoly over these terminologies."