OPINION: The trouble with torpedoing India’s plan for a third aircraft carrier 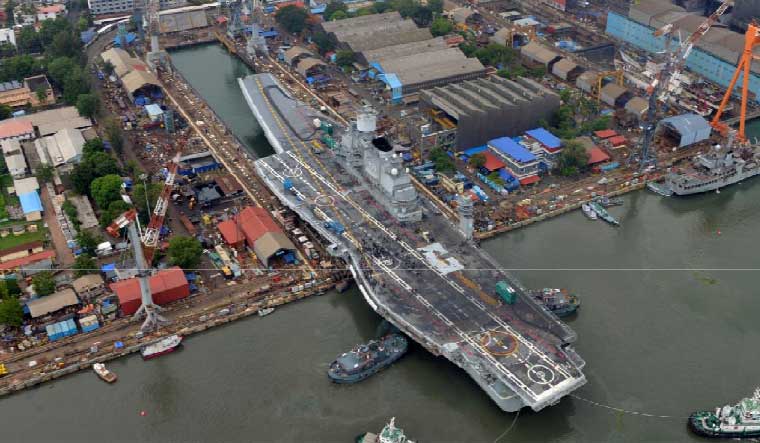 INS Vikramaditya at the Cochin Shipyard, which is tasked with building IAC-I and was planned to be the yard that would construct IAC-II | Cochin Shipyard

Barely a month after taking over as India’s first Chief of Defence Staff (CDS), General Bipin Rawat, when speaking to journalists in February 2020, indicated that the Indian Navy may not get approval for a third aircraft carrier (the second indigenous aircraft carrier IAC-2) anytime soon. The reason, he said, was that since aircraft carriers are expensive to build, the priority instead should be to bolster the Navy’s submarine fleet.

Many in the defence and strategic community were alarmed at the cursory manner in which the General’s comments were made.

India currently has only one aircraft carrier—the 45,000-ton INS Vikramaditya, acquired from Russia in 2013. This is the third carrier to be operated by the Indian Navy since independence. India acquired its first aircraft carrier, INS Vikrant, from the United Kingdom in 1961, being the first Asian country to do so. INS Viraat, the second carrier and also from the UK, came in 1987. Both have since been decommissioned.

Exorbitant costs involved in operation and maintenance of a carrier and vulnerability to anti -ship missiles besides submarines are touted as reasons against the carrier. While the cost factor is true, carriers take over a decade or so to build and so the expenditure gets spread over that period. Further, an aircraft carrier has a life span of about 40-50 years, which is value for money.

Warships including carriers are meant to go in harm’s way and therefore a certain amount of vulnerability will always remain in battle. However, the primary weapons of a carrier are its ‘integral aircraft’ which have a long reach, far ahead of the carrier group. The aircraft carrier and ships of the fleet/formation afford mutual defence and protection. On the other hand ‘shore based aircraft’ are limited by operational radius and even with aerial refueling; their effectiveness at extended ranges would be determined by human endurance of the pilots sitting in cramped cockpits.

The argument against a carrier therefore is mainly about the inter-se priority of the shrinking defence budget. The decision to cancel a strategic asset such as the IAC -2, if at all, must be debated at the highest level of the national security leadership and only then announced at an appropriate forum and not during journalistic interaction.

Further, the investment already incurred on carrier production facilities at Kochi Shipyard Ltd would become redundant, if the programme is closed and trained and skilled manpower would dissipate. For instance, when India closed the HDW submarine programme in 1994 for various reasons, it had difficulty in finding trained manpower when subsequently the Scorpene submarine project was approved in 2005.

Interestingly, China recently commissioned its first indigenous aircraft carrier, the Shandong, in December 2019. Earlier, China acquired the decommissioned Soviet carrier Varyag from Ukraine which was towed to China in 2002 under the pretext of turning it in to a theme park—and then later converted to a training aircraft carrier named Liaoning.

Simultaneously China spent a lot of time and effort in tailing American carriers and learning the nuances of aircraft carrier operation. China is now working on its third and fourth aircraft carriers of the Type 002 class at the Jiangnan shipyard in Shangai. The Chinese Navy aims to have at least 10 aircraft carriers by 2050.

China does not require these carriers for the South China Sea (SCS) as she has reclaimed and militarized several islands in the Paracel and Sprately group complete with airstrips, fighter aircraft and air defence systems. These are obviously meant for the IOR to protect the critical import of crude oil from West Asia and West Africa, to fuel China’s burgeoning economy. In fact China’s first overseas base at Djbouti now has a pier capable of berthing an aircraft carrier.

The Indian Navy is expected to push for a grant of ‘Acceptance of Necessity’ (AoN) for the third carrier, the IAC- 2 soon. Admiral Karambir Singh, Chief of Naval Staff (CNS) has consistently maintained that the need for a new 65,000-tonne aircraft carrier (IAC-2) remains non-negotiable, since one carrier would need to be deployed on the western and eastern seaboard respectively, while the third undergoes refit and repair. To balance the cost of the third carrier, the IN has reportedly trimmed the number of fighter jets to 36 (two squadrons) from the original 57 planned to be inducted in to the force.

Former PM Atal Behari Vajpayee had said in 2005 “India’s maritime area of interest extends from the Straits of Hormuz in the west to Malacca Straits in the east. PM Modi’s maritime vision saw the ‘Look East’ policy re-designated to the ‘Act East’ policy, enunciated to an ‘Indo-Pacific’ policy and is intent on reinvigorating the Quadrilateral Security Dialogue or QUAD for short.

All of these have the maritime medium as its backbone—with the Indian Navy being the premier maritime force. The Navy may not be able to meet the political and strategic ambitions of the country without adequate number of carriers.

Several strategic analysts post the Galwan incident have opined that scrapping of the proposed mountain strike corps in 2017 was a strategic mistake; the IAC-2 should not be allowed to go the same way. A ‘Blue Water navy’ such as the Indian Navy requires both the carriers and submarines in its arsenal and, given the political will, funds can always be made available for the same.

The author is a former Principal Director Naval Intelligence and has served as a Director in the Cabinet Secretariat.