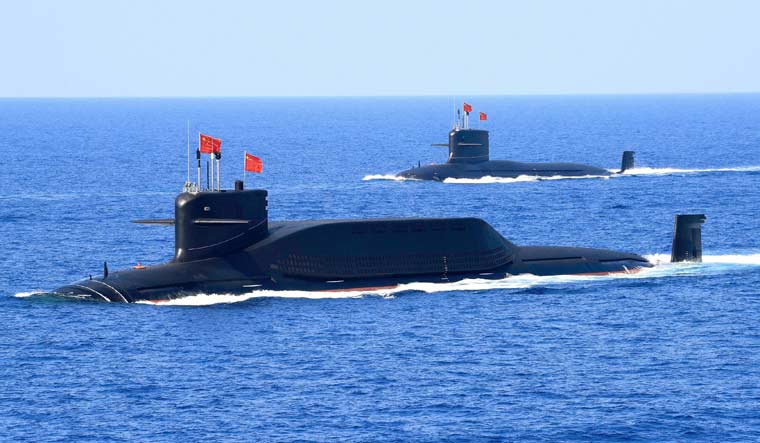 A nuclear-powered ballistic missile submarine of the Chinese Navy (foreground), sailing with another vessel | Reuters

The US Department of Defense on Thursday released its annual report to the Congress on the progress of China's military. The Military and Security Developments Involving the People’s Republic of China 2019 is over 120 pages long and provides details on China's military strategy, state of modernisation and disputes with neighbours.

Of particular interest to India would be the Pentagon's assessment of China building capabilities for the Indian Ocean. The report notes the People's Liberation Army (PLA) “is additionally developing power projection capabilities and concepts of operation in order to conduct offensive operations within the second island chain, in the Pacific and Indian Oceans, and in some cases, globally.”

The Pentagon report openly states long-held concerns about the strategic and military dimensions of China's One Belt, One Road (OBOR) economic infrastructure initiative. The report states “OBOR is intended to develop strong economic ties with other countries, shape their interests to align with China’s and deter confrontation or criticism of China’s approach to sensitive issues.”

The Pentagon adds, “Some OBOR investments could create potential military advantages for China, should China require access to selected foreign ports to pre-position the necessary logistics support to sustain naval deployments in waters as distant as the Indian Ocean, Mediterranean Sea, and Atlantic Ocean to protect its growing interests.” The China-Pakistan Economic Corridor (CPEC), a key element of OBOR, has been suspected of having a military dimension, with concerns that China could use the new port of Gwadar in Balochistan as a base for its navy.

The Pentagon report pays considerable attention to the modernisation of China's submarine capability.

China's navy is not the only service that is projected as being capable of operating in areas near to India. The Pentagon report notes “construction of new airfields and hangars on outposts in the South China Sea extends the possible operating areas of PLA aviation forces”. It claims future Chinese aircraft operating from facilities in the Spratly Islands could reach the Indian Ocean.

The Pentagon notes the progress of several Chinese defence projects that would be of concern to India such as its new aircraft carriers and bombers. It notes China's indigenously built aircraft carrier “completed multiple sea trials during 2018, and will likely join the fleet by the end of 2019”. The Pentagon also reveals China's second indigenous aircraft carrier, which can carry heavier aircraft, is currently under construction and is projected to be operational by 2022.

The Pentagon report tracks the progress of China-Pakistan ties, noting that Islamabad signed arms contracts amounting to over $5 billion with Beijing in the 2013-17 period. These included deals for eight submarines, four surface warships and armed drones.

The report refers to the Doklam plateau standoff between India and China in 2017. It notes, “Tensions remain with India along the shared border over Arunachal Pradesh, which China asserts is part of Tibet and therefore part of China, and over the Aksai Chin region at the western end of the Tibetan Plateau”. The Pentagon notes India and China resumed their annual defence dialogue in November 2018.