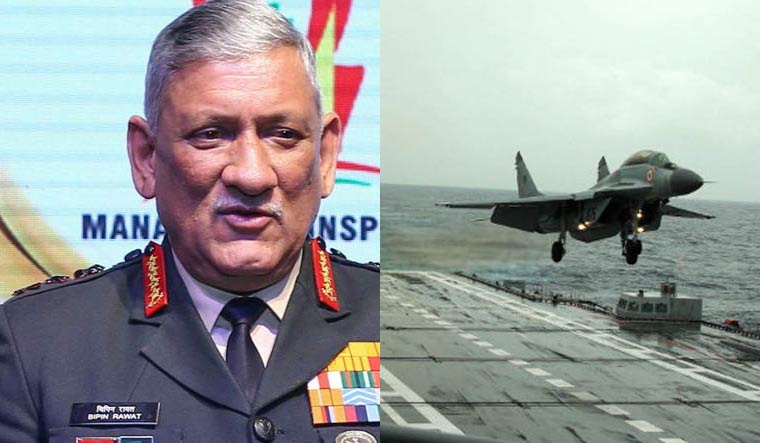 Adding to concern about the Indian Navy's prospects to acquire a new aircraft carrier, Chief of Defence Staff General Bipin Rawat said on Monday that acquisition of new submarines was a priority over aircraft carriers. Rawat was interacting with journalists in Delhi.

The Indian Navy has one serving aircraft carrier, the INS Vikramaditya, and another ship being built in Kochi, the Vikrant, which is expected to be commissioned by 2022. Both ships have displacement of about 45,000 tonnes.

Rawat was quoted by news agency ANI as saying, "When we know that there would be two aircraft carriers there, and if the submarine force is dwindling, then our priority should be for submarines".

Rawat added that the Indian Navy's demand for a third aircraft carrier would be considered after "assessing performance" of the Vikrant. The indigenously built Vikrant is scheduled to begin its first sea trials later this year.

The proposed third carrier, referred to the Vishal, was to have been significantly larger than the existing Vikramaditya and Vikrant. The Indian Navy had also said the third carrier would have electromagnetic catapults to launch its aircraft.

The Vikramaditya and Vikrant are designed to use 'ski-jumps' to launch their aircraft. Aircraft using ski-jumps have momentum only from their engines and are thus unable to carry heavy fuel and weapon loads. A catapult, on the other hand, gives the aircraft added momentum, enabling it to launch at higher weights and provides an advantage in surface-attack missions or long-range air defence roles. Moreover, catapults enable the launch of specialised aircraft like airborne early-warning systems.

The Indian Navy's plans to acquire six new diesel-electric submarines has been proceeding at a snail's pace even as induction of the indigenously built Scorpene class continues after years of delay.

The third aircraft carrier is not the only procurement priority on the back-burner. Rawat said the Indian Air Force's requirement of 114 fighter jets would have to be staggered. The value of the proposed deal for 114 jets is estimated to be around $15 billion.

Rawat said, "I am in favour of staggered acquisitions of weapon systems where small orders are placed, which gives us time to take care of their downtime and also allow modernisation of the three services simultaneously."

Rawat declared the Eastern and Western commands of the Indian Navy would be integrated into Peninsula Command.