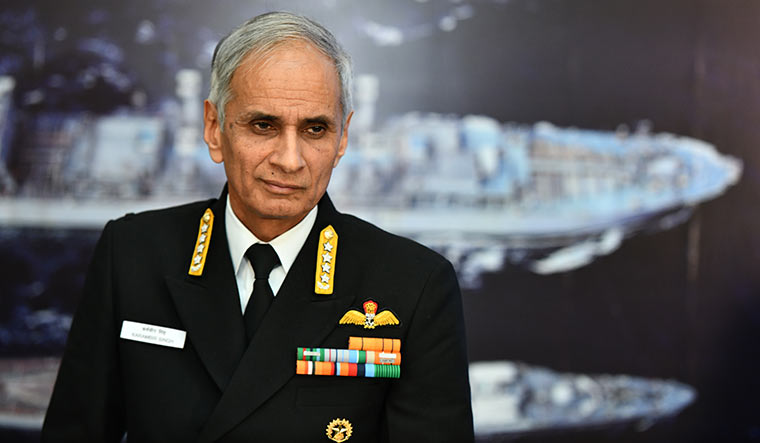 ADMIRAL KARAMBIR SINGH, the ‘Grey Eagle’ of the Indian Navy (the senior-most serving naval aviator), who became the naval chief in June, has been struggling to find money for modernisation of the Navy. While China plans to have 10 aircraft carriers by 2049, he is finding it difficult to push for India’s third aircraft carrier. Excerpts from an exclusive interview with the admiral:

Q/How do you see the ongoing expansion of the Chinese Navy?

A/The commissioning of the Chinese military base in Djibouti in 2017 has augmented China’s sustenance capability in the Indian Ocean. In 2018, an average of seven [Chinese] ships and submarines were deployed in the Indian Ocean region (IOR) every month. Chinese investments in various projects across IOR are also known. We are assessing our operations and acquisition plans to [meet] the challenges. [We are ensuring] that the Indian Navy remains poised to meet all maritime contingencies.

Q/Considering the budgetary constraint, do we really need the third aircraft carrier?

A/As the Navy chief, I am convinced that the country needs three aircraft carriers, so that two are operational at all times. And it should be 65,000 tonnes with electromagnetic propulsion.

Q/When will the first indigenous aircraft carrier, Vikrant, join the fleet? It has missed deadlines.

A/We are expecting [its] delivery by February 2021. After aviation trials, which will take at least a year, it will have formal induction into the Navy’s fleet.

Q/What are the Navy’s modernisation priorities?

A/The modernisation and enhancement of naval capabilities are an ongoing process. The Navy is striving to address the capability voids in areas such as aircraft carriers, tankers, landing platform docks, mine countermeasures vessels, submarines and integral helicopters. We are also enhancing our surveillance capabilities through induction of long-range maritime reconnaissance aircraft, integral helicopters and high-altitude long-endurance aircraft or remotely piloted aircraft. Primarily, the focus has been to augment capability through induction of modern platforms, weapons and sensors.

Q/Will the modernisation have an indigenous component?

A/Yes. Our preferred choice of inducting ships and submarines has been through the indigenous route; 48 of 50 ships and submarines on order are from Indian shipyards. The Navy holds a mix of weapons, sensors and equipment of varied vintage. Their modernisation is an ongoing process. In addition, the procurement of new equipment, including several indigenous cases under the Make in India initiative, has contributed towards a mix of state-of-the-art, contemporary and vintage weapons, sensors and equipment.

Q/The Navy is left with only two minesweeper vessels to protect its sea lanes and ports. Also, what is the status of the procurement of torpedoes for the submarine fleet?

A/The Navy envisages induction of 12 MCMVs. These ships will be capable of route survey or sanitisation, local naval defence, and search and rescue operations. The Navy intends to build these ships at an Indian shipyard, through transfer of technology from a foreign shipyard. Responses to the RFI (request for information), issued in March 19, have been received. The responses are being examined, based on which the RFP (request for proposal) will be issued shortly. Similarly, efforts are being made to procure torpedoes as early as possible.

Q/After the Balakot airstrike, the Indian Navy managed to block the Pakistan navy at Karachi. What is the current status and stance of the Pakistan navy? How capable are we to defend our critical installations on the west coast?

A/At the time of the Pulwama attacks, the Indian Navy’s largest theatre-level operational readiness exercise, TROPEX, was in progress. Indian naval ships, aircraft, submarines and support units were deployed across the entire Indian Ocean region. In a proactive step to deter any nefarious activity from our western neighbour, the Navy swiftly transitioned from the training state to a high degree of operational readiness and redeployed itself in the north Arabian Sea. In the ensuing operations, the naval ships, submarines and aircraft were poised to respond to any escalatory action across the border. Offensive deployment of the Navy, undertaken in synergy with operations of the Army and the Air Force, limited the options on land for the adversary and deterred the Pakistan navy from adventurism.

Q/What is your opinion on creating the post of chief of defence staff? How will CDS help in carrying out joint operations?

A/It is a historic and long-awaited defence reform, and the Indian Navy fully supports this step. The emerging trends clearly highlight the changing character of warfare. Real-time intelligence, seamless communications, accuracy and lethality of weapon systems and an increasingly automated battlefield necessitate that the three services be structured, trained and equipped in an integrated manner. There is commonality and overlap in surveillance, air space management, air defence, and weapons and missile systems. Technological advancements will only increase the linkages further. The existing and emerging complexities in the nature of conflict demand increased jointness amongst the three services, which CDS will facilitate.