China now has two aircraft carriers in service, with two more in the works 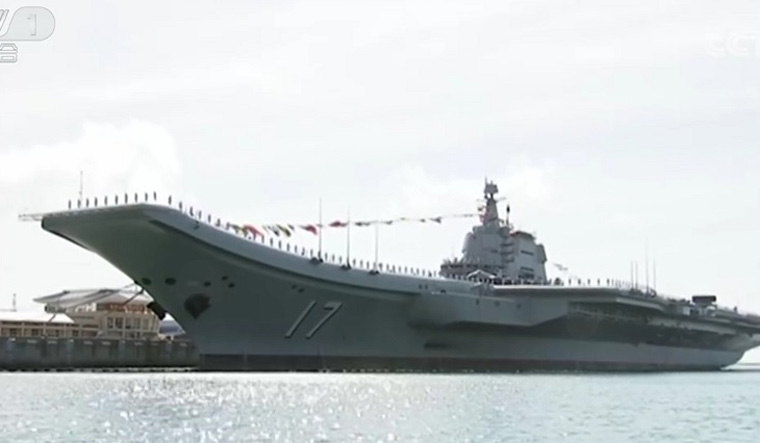 An image of the Shandong at its commissioning in Sanya, Hainan | Via CCTV

With President Xi Jinping in attendance, China on Tuesday commissioned the Type 002-class aircraft carrier Shandong in Sanya in the island province of Hainan, bordering the South China Sea. This puts China in a group of only four countries that have multiple fixed-wing aircraft carriers, with the US, UK and Italy being the others.

The Chinese state-run news outlet Global Times cited a CCTV report saying that the carrier would have a displacement of around 40,000 to 60,000 tons and an airwing of up to 36 J-15 'flying shark' fighters (a Chinese derivative of the Russian Su-33). It is expected to have many improvements over the country's other carrier, the Liaoning, with a similar ski-jump flight deck, a "more advanced electronic devices and control and command system" and an "optimized superstructure and internal layout".

According to the Centre for Strategic and International Studies, the carrier (earlier referred to as the Type 001A) can also carry KA-28/Ka-31/Z-8s/Z-8JH/Z-8AEW helicopters.

China has kept details of the carrier project under wraps, with the project itself only officially announced in 2015. The United States Naval Intelligence News reported that one domestically-built carrier was being built in the Dalian Shipyard while satellite images shared by CSIS showed another under construction at the Jiangnan shipyard, expected to be the more advanced Type-003 project.

With a STOBAR (Short Take-Off Barrier-Arrested Recovery) configuration, the Shandong would be China’s second carrier after the Kuznetsov-class Liaoning, which was purchased from Ukraine in 1998 and used as a training ship—later declared combat-ready in 2016.

The addition of the Shandong to the Chinese fleet will greatly enhance the PLAN’s capabilities in the South China Sea. The Hainan province where the ship was launched is located to the East of Vietnam, which contests the SCS with China along with Malaysia, the Philippines, Taiwan and Brunei.

In November, China sailed the Shandong through the Taiwan strait, resulting in Taiwan scrambling fighters and jets and both the US and Japan trailing the ship with their own vessels.

A third Chinese carrier project is also reportedly under way, the Type 003, with plans to have four in operation by 2024.

After the retirement of the INS Viraat in 2017, India has only one aircraft carrier in service, the 45,000-ton Kiev-class INS Vikramaditya. The domestically-built INS Vikrant has faced multiple delays and is expected to commence basin trials in 2020, with delivery to the Navy expected by 2021.

The Global Times stated that the China is now the first Asian country to operate a domestically-built carrier since World War II. This feat would have been achieved by India in 2018 had INS Vikrant been inducted as per schedule.