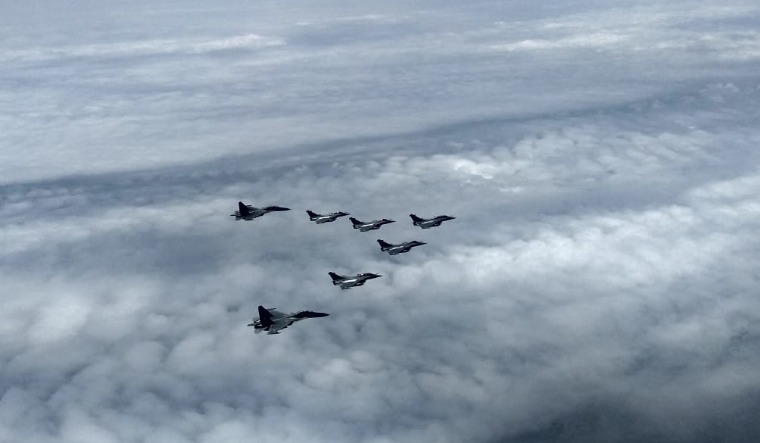 Over five years after Prime Minister Narendra Modi announced a 'surprise' deal for 36 Rafale fighter jets from France, the first five aircraft for the Indian Air Force landed in Ambala on Wednesday afternoon.

The aircraft took off from the Al Dhafra airbase in the UAE on Wednesday morning. The five Rafale jets were flagged off from a Dassault facility in Bordeaux on Monday, from where they flew to the UAE.

Defence Minister Rajnath Singh's office said the Rafales were escorted by two Sukhoi 30 MKIs after they entered Indian airspace. The jets were also refuelled mid-air from a French tanker at a height of 30,000 feet.

The Rafale jets are India's first major acquisition of new fighter planes in over two decades, and they are expected to significantly boost the Indian Air Force's combat capabilities. On Tuesday, the government imposed Section 144 in the vicinity of the Ambala air base to minimise unauthorised gatherings ahead of the arrival of the Rafale jets.

In a statement on the arrival of the jets, Defence Minister Rajnath Singh said, "The touch down of Rafale combat aircrafts in India marks the beginning of a new era in our Military History. These multirole aircrafts will revolutionise the capabilities of" Indian Air Force.

Rajnath thanked the French government Dassault and other companies for assisting India in the Rafale deal.

"I congratulate the IAF on a professionally executed ferry. I am sure that 17 Squadron, the Golden Arrows, will continue to live up to their motto of ‘Udayam Ajasram’. I am extremely happy that IAF’s combat capability has got a timely boost."

Rajnath praised Prime Minister Narendra Modi for deciding to buy the 36 Rafales. "The Rafale jets were purchased only because PM Shri @narendramodi took the right decision to get these aircrafts through an Inter-Governmental Agreement with France, after the long pending procurement case for them could not progress. I thank him for his courage & decisiveness."

Rajnath also took a swipe at critics who alleged corruption in the deal for 36 Rafale jets. “The Rafale jets were purchased when they fully met the operational requirements of the IAF. The baseless allegations against this procurement have already been answered and settled,” Rajnath said.