French jet that refuelled Rafales was selected by IAF twice, but never bought 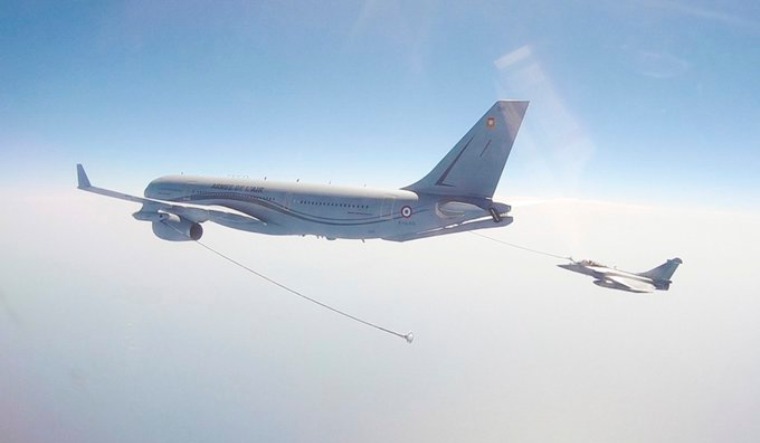 On Tuesday evening, the Indian Air Force released spectacular images of its soon-to-arrive Rafale fighters refuelling in mid-air as they flew from France to the UAE.

The irony is that over the past decade, the Indian Air Force has twice selected the A330 MRTT for contracts to buy six tanker aircraft to replace the IL-78, which is of Russian origin. But the contracts could not be concluded due to pricing disputes. Aerial refuelling is a critical ‘force multiplier’ for most air operations.

The Indian Air Force inducted its first IL-78 aircraft in 2003. But concerns over the aircraft's serviceability emerged soon and by 2006-2007, the Indian Air Force started looking around for a replacement, with the IL-78 and A-330 MRTT the only contenders.

The A330 MRTT is a derivative of the popular twin-engine Airbus A330 passenger jet, which boasts of long range. While the A330 MRTT had a higher cost than the IL-78, it was a newer design, having lower operating costs on account of having two engines. The Russian jet has four engines.

Moreover, the A330 MRTT boasts the capacity to carry fuel weighing up to 111 tonnes, which is higher than the IL-78's load, which is estimated to be 100 tonnes. The A330 MRTT can also function as full-specification transport aircraft, able to carry up to 300 passengers or 45 tonnes of cargo. Interestingly, an A330 MRTT of the French Air Force arrived with 120 ventilators and 50,000 COVID-19 test kits at the Palam Air Force station on Tuesday.

In May 2009, then Indian Air Force chief Fali Homi Major said the force had short-listed the A330 MRTT as its preferred supplier and began negotiations. The contract was expected to be worth at least $1 billion. However, by January 2010, the government had cancelled the tender over cost concerns. Later that year, the Indian Air Force again called a revised tender for six aerial refuelling aircraft. In the second contest, too, the A330 MRTT and IL-78 were the main bidders.

In January 2013, the Indian Air Force selected the A330 MRTT again. This time, the value of the contract had risen to around $1.5 billion. While the IL-78 had a lower purchase cost, the A330MRRT was evaluated as having lower 'life cycle' costs, making it more economical to operate in the long term.

However, like the first contract, pricing disputes continued and by 2016, the tender was cancelled. In the decade since the Indian Air Force first selected the Airbus A330 MRTT, the European aircraft has won multiple contracts—from the UAE, Singapore, Saudi Arabia and a group of NATO members. Airbus states a total of 60 A330 MRTT aircraft has been ordered until March.

Interestingly, Hindustan Times reported in March this year, the Indian Air Force could consider a new option to beef up its aerial refuelling capability: Leasing.

“We are finalising the requirements for the proposed lease of tankers to boost our in-flight refuelling capabilities. We are looking at aspects such as whether we should opt for a wet [the lessor provides crew and maintenance] or dry lease. Leasing will be a better option as our budget is under pressure,” an Indian Air Force officer told Hindustan Times. Leasing is mentioned the government's Defence Procurement Procedure, 2020, as an acquisition category along with "buy" and "make", on the grounds "it provides an innovative technique for financing of equipment/platforms".