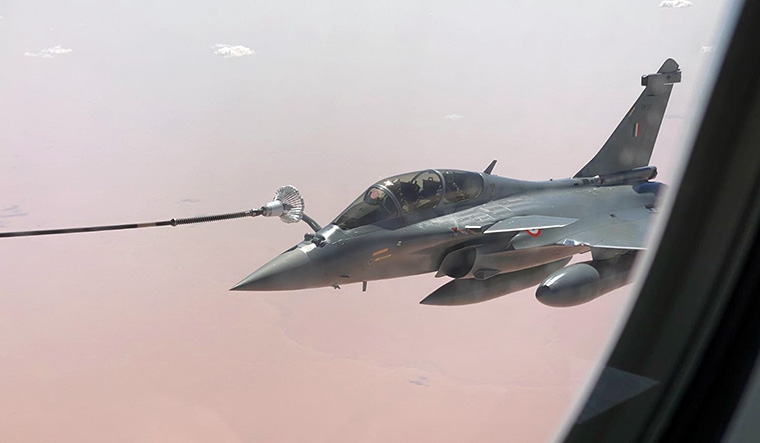 From Bordeaux in France to the Al Dhafra airbase in the United Arab Emirates, the first batch of five Dassault Rafales will fly nearly 8,000km before reaching their destination, Ambala, Haryana, on Wednesday.

On Tuesday, the Indian Air Force released a treat for aviation enthusiasts: Images of the Rafale being refuelled mid-air—at 30,000 feet—on its way to the Al Dhafra airbase.

“Indian Air Force appreciates the support provided by French Air Force for our Rafale journey back home,” the IAF tweeted.

The Rafales were refuelled by a French Air Force Airbus A330 Multi-Role Tanker Aircraft (MRTA) during its journey to Al Dhafra (a distance of over 5,000km). Incidentally, a Russian tanker aircraft will be the next to refuel the Rafale, with the IAF’s own IL-76 to handle mid-air refuelling in the next leg of the Rafale’s journey to Delhi.

The Indian Embassy in France also shared some snaps of the mid-air refuelling.

The much-anticipated aircraft will be met with elaborate security arrangements at Ambala, where Section 144 has been enforced around the airbase, with photography prohibited at the time of its landing and gathering on roofs prohibited. Drone activity has also been prohibited within 3km of the Ambala Air Force station.

In addition to the Rafale, France also sent medical equipment onboard an Airbus A330 MRTT, carrying 50 Osiris-3 ventilators, 70 Yuwell 830 ventilators, 50,000 IgG/IgM test kits and 50,000 nose and throat swabs, which was handed over to R.K. Jain, Secretary General of the Indian Red Cross. The donations come after France granted €200 million in financial aid through the French Development Agency.