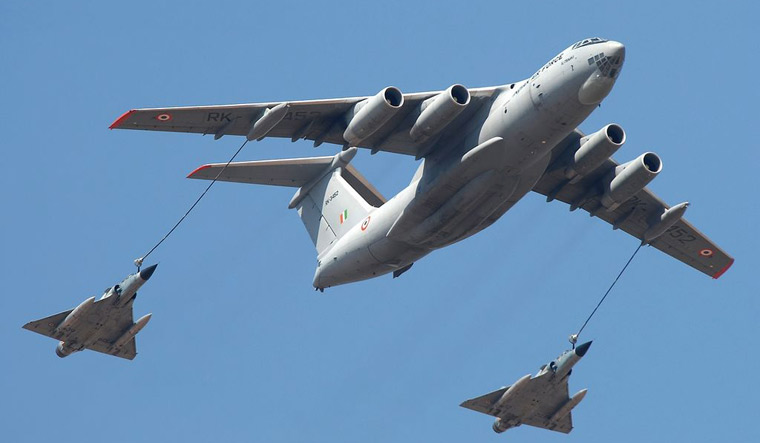 For most of the past decade, aviation watchers have followed the Indian Air Force's quest for over a 100 new fighter aircraft, often with frustration. But there is another Indian Air Force requirement that has not been fulfilled despite the service selecting its preferred product, twice.

On Friday, during his annual press conference, Air Chief Marshal R.K.S. Bhadauria announced that an “earlier process” to select a new aerial refuelling aircraft for the Indian Air Force had been withdrawn and new requests for information would be issued to potential bidders.

This will be the third such contest since 2006-2007. The Indian Air Force inducted its first aerial refuelling aircraft in 2003 with the arrival of the first IL-78 aircraft from Russia. The IL-78, which has four engines, was a modification of the IL-76 transport aircraft, in service with the Indian Air Force since the 1980s. The Indian Air Force purchased a total of six IL-78 jets, which could extend the range of its fighters such as the MiG-29, Su30MKI and Mirage 2000 in flight.

However, given concerns about the serviceability of the IL-78 fleet, the Indian Air Force soon sought six new aerial refuellers. The two aircraft in consideration in 2006-2007 were the IL-78 and the Airbus A330 MRTT.

The A330 MRTT was a derivative of the popular twin-engine A330 passenger jet, which boasted of long range. While the A330 MRTT had a higher cost than the IL-78, it was a newer design, having lower operating costs on account of two engines. Moreover, the A330 MRTT boasts the capacity to carry fuel weighing up to 111 tonnes, which is higher than the IL-78's load, which is estimated to be 100 tonnes.

An added advantage of the A330 MRTT is the fact that it is certified to use two refuelling systems. One refuelling system is the 'hose and drogue' system in which a refueller transfers fuel to a probe extending from the receiving aircraft. The other system, commonly found on US-origin aircraft, is the 'flying boom' in which a refueller transfers fuel to a receptacle on the receiving aircraft's fuselage. The flying boom system is found on many US-origin aircraft in service with the Indian military such as the P-8I maritime patrol aircraft of the Navy and the C-17 heavy transport jet of the Indian Air Force.

In May 2009, then Indian Air Force chief Fali Homi Major said the force had short-listed the A330 MRTT as its preferred supplier and began negotiations. The contract was expected to be worth at least $1 billion. However, by January 2010, the government had cancelled the tender over cost concerns. Later that year, the Indian Air Force again called a revised tender for six aerial refuelling aircraft. In the second contest, too, the A330 MRTT and IL-78 were the main bidders.

In January 2013, the Indian Air Force selected the A330 MRTT again. This time, the price of the contract had risen to around $1.5 billion. While the IL-78 had a lower purchase cost, the A330MRRT was evaluated as having lower 'life cycle' costs, making it more economical to operate in the long term.

However, like the first tender, the government had doubts about the price and negotiations dragged on. The contract was cancelled in July 2016. "We have [recently] cancelled the MRTT deal with Airbus because platforms are too expensive and not economically viable to operate," a ministry of defence official told US publication Defense News then.

The Indian Air Force had repeatedly expressed fears over delays in acquisition of new aerial refuellers given concerns over the IL-78 fleet's reliability.

A report of the Comptroller and Auditor General in August 2017 had panned the serviceability of the IL-78, noting only 49 per cent of the fleet was available for operations at any given time from 2010 to 2016. The CAG report blamed the low serviceability on the “poor availability of spares” from the original manufacturer, which had been disrupted since the fall of the USSR. These spares had be obtained from vendors in Ukraine and Russia.

In the decade since the Indian Air Force first considered the A330 MRTT, the European tanker has won contracts in Saudi Arabia, Singapore, UAE and South Korea.

Interestingly, the multiple delays in the aerial refueller contract for the Indian Air Force may prove to be blessing for a US vendor: Boeing. Boeing is continuing induction trials on its KC-46 tanker, which is based on the Boeing 767 passenger jet.