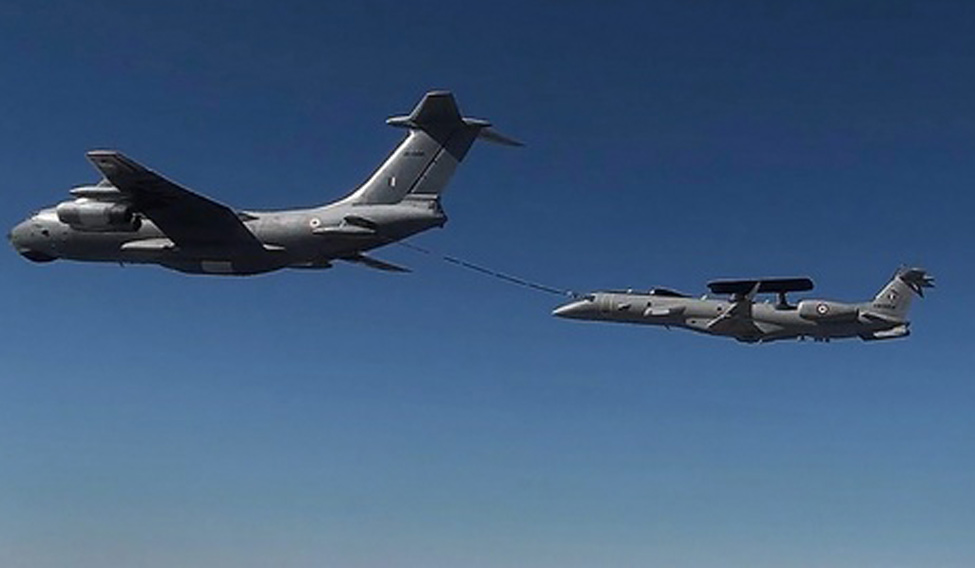 This the first time mid air refuelling was carried out, which will enhance IAF's prolonged surveillance mission.

AEW&C, which has been mounted on IAF's Embraer platform, provides the capability to see deeper into enemy territory.

"Today's air-to-air refuelling was a hook up and release, which will progress to actual fuel delivery in coming sorties. Once the procedure is cleared, it will permit Embraer AEW&C named as Netra aircraft to stay on station for long hours and monitor the skies. It will add substantially to the air defence picture of the IAF," Air Vice Marshal (Retd) Manmohan Bahadur told THE WEEK.

The “Probe and Drogue” air-to-air refuelling methodology practiced by IAF pilots requires exceptional flying skills as the receiving aircraft has to accurately insert the receptacle probe into the basket shaped drogue trailing behind the fuel tanker aircraft, according to an IAF official.

"During the process of air-to-air refueling, both aircrafts have to maintain extremely accurate flying parameters. A mere 10 minute in-flight refuelling can generate additional four hours of flying endurance. The achievement has given a tremendous boost to Indian Air Force’s operational capability," Wing Commander Anupam Banerjee, IAF spokesperson said while adding that IAF is one of the few air forces in the world to demonstrate this capability and the Embraer AEW&C has also proved its prowess in the category.

IAF has been struggling with capacity of mid-air refuelling as its fleet of IL 78 tanker is plagued by maintenance problems. And according to a senior IAF officer, who does not want to be quoted, IAF desperately need more refuellers to stay prepared to counter China in the eastern sector.

Even a recent report by the Controller and Auditor General (CAG) has highlighted that the IAF’s runways are too short for its Ilyushin-78 tanker fleet, their refuelling pods are dogged by failures and the airworthiness is questionable.

Your form could not be submitted.
This browser settings will not support to add bookmarks programmatically. Please press Ctrl+D or change settings to bookmark this page.
Topics : #Indian Air Force