Report says India is integrating weapon on its Mi-17 helicopters 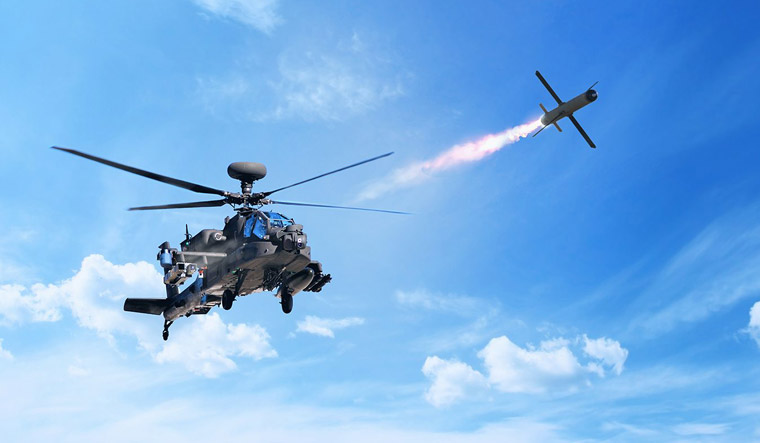 A Spike NLOS launch from an Apache helicopter | Lockheed Martin

The ongoing conflict between Russia and Ukraine has brought to the limelight names like NLAW, Javelin and Stugna-P. For the uninitiated, these are anti-tank missiles supplied to the Ukrainian Army. The three weapons, which are light enough to be fired by soldiers, have wreaked havoc on Russian tanks and armoured fighting vehicles.

The conflict in Ukraine has shown anti-tank missiles can do much more than just kill tanks: Earlier this month, Kyiv released footage of a Stugna-P shooting down a Russian Ka-52 attack helicopter.

Perhaps in acknowledgement of the versatility of these weapons, the Indian Air Force is buying a unique long-range anti-tank missile system from Israel, ANI reported on Sunday. ANI reported “The Israeli Spike NLOS anti-tank guided missile is being integrated into the Russian-origin fleet of Mi-17V5 helicopters which can take out targets from long ranges and can prove to be very effective against enemy armoured columns in times of conflict.”

The name Spike would be familiar to people in India: It is a family of Israeli anti-tank missiles, with the variants primarily differing in range. The Indian Army has inducted a man-portable variant of the Spike, which can destroy tanks and bunkers up to four kilometres away.

According to Rafael, the Israeli company that makes the Spike family, 39 nations have purchased different variants.

The Spike NLOS is the most advanced member of the Spike family. 'NLOS' stands for 'Non Line Of Sight', denoting long range. It has a range of around 32 kilometres, nearly four times that of the US-made AGM-114 Hellfire, which is carried on the Apache attack helicopter.

The ANI report suggested India could build the Spike NLOS under future purchases. “Spike NLOS ATGMs have been ordered in limited numbers at the moment and the force would look for getting the missiles in larger numbers through 'Make in India' solutions. The air-launched NLOS ATGMs can carry out strikes at its ground targets from standoff distances and can cause considerable damage to the enemy tank regiments and prevent their advances,” ANI reported.

ANI reported the Indian Air Force started showing interest in the Spike NLOS “almost two years ago when the Chinese Army deployed a large number of tanks and infantry combat vehicles close to the Line of Actual Control.”

The Spike NLOS was unveiled publicly in 2009. However, subsequently, Israel acknowledged the Spike NLOS was based on the Tammuz, a long-range anti-tank missile developed based on the brutal lessons learned from the Yom Kippur war of 1973. Then, Egyptian and Syrian anti-tank missiles inflicted considerable losses on Israeli tanks, necessitating the development of a weapon with significantly greater range to hit Arab armour.

Rafael has modified the Spike NLOS to be fired from helicopters, land-based launchers, ships and naval patrol boats.

The Spike NLOS uses an electro-optical seeker that enables the launch operator to clearly see targets, unlike missiles reliant on radar or infra-red guidance. The seeker is also coupled to a datalink that enables the launch operator to control the missile in flight to attack different parts of a tank or select another target, if not abort the strike. The capability for the operator to control the missile—known as man in the loop—enables engagement of moving targets and operations in bad weather. The electro-optical seeker also doubles up as a real-time reconnaissance system of the battlefield, giving invaluable information to the launch operator.

The long range of the missile reduces the vulnerability of the launch aircraft to both medium-range anti-aircraft missiles and to short-range air defences, such as man-portable surface-to-air missiles like the US-made Stinger and British Starstreak. The Stinger and Starstreak are being used to deadly effect against Russian air power in Ukraine.

According to Rafael, the Spike NLOS can be armed with different types of warheads suited to destroy tanks, air defence systems or for use in urban combat, where the need to prevent harm to civilians is critical.

The US Army has purchased the Spike NLOS as an interim weapon for its Apache attack helicopters, complementing less-versatile Hellfire missiles. Defense News reported in 2021 “... the [US] Army plans to buy 179 Spike NLOS missiles in FY22 for $44.7 million. The service bought 170 of the missiles in FY21 for $38.1 million.” Lockheed Martin is partnering with Rafael to promote the system in the US.

South Korea and Philippines have also purchased the Spike NLOS for use on their naval helicopters.

The Spike NLOS would mark a significant upgrade for the IAF's Mi-17 fleet, if a purchase is confirmed. The Mi-17 has been designed with the capability to carry Russian-built laser-guided anti-tank missiles like the Vikhr-M, but these have significantly lesser range than the Spike NLOS. The decision to zero in on the Mi-17, a medium-weight transport helicopter, as carrier for the Spike NLOS could be attributed to the aircraft's suitability for operations at high altitudes, such as those in Ladakh.

In addition to targeting Chinese tanks, the Spike NLOS can be used to engage command centres, mobile air defences and other equipment, effectively becoming a multi-purpose weapon for the IAF.