Expect sincerity from China on de-escalation and disengagement: MEA 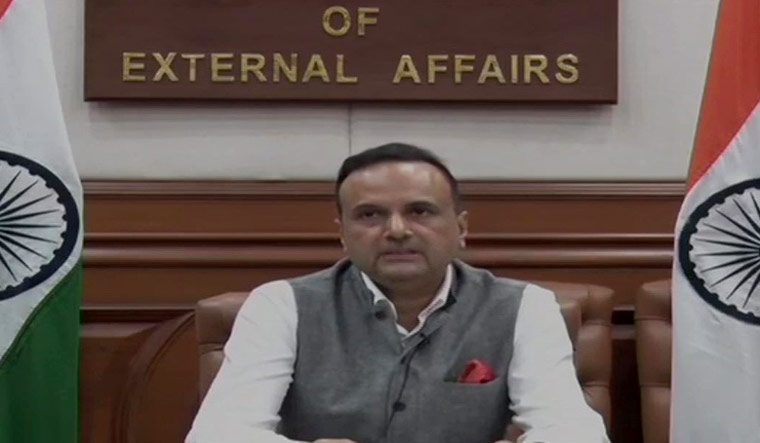 Amidst reports that the next round of Working Mechanism for Consultation and Coordination (WMCC) talks on the India-China border issue is likely to be held tomorrow, the Ministry of External Affairs said that it expected sincerity from the Chinese side for complete disengagement and de-escalation in the border areas at the earliest.

"It is our expectation that the Chinese side will sincerely work with us for complete disengagement and de-escalation and full restoration of peace and tranquillity in the border areas at the earliest, as agreed to by the Special Representatives (SR),” said MEA spokesperson Anurag Srivastava at the weekly media briefing.

Srivastava's remarks come in the backdrop of reports that China is slowly reneging on its commitment to de-escalate, and that it continues to deploy around 40,000 soldiers of the People's Liberation Army (PLA) in forward areas in the Eastern Ladakh sector. Reports suggest they have dug in their heels in the Finger 5 area of Pangong Tso, instead of retreating to their permanent position in Sirijap. Nor have they drawn back in the Hot Springs and Gogra regions. This is despite several rounds of talks on the diplomatic and military levels. The fourth round of talks of the senior commanders was held on July 14. There have already been two WMCC talks since the clash between soldiers in the Galwan Valley on June 15.

The WMCC are talks under a mechanism established in 2012, and are held at the level of joint secretaries. One round of the special representative (SR) talks have also been held on July 5. The SRs are National Security Advisor Ajit Doval for the Indian side and Chinese foreign minister Wang Yi on the other side. They had a virtual meet during which they again agreed to work towards the complete disengagement of the troops along the LAC and de-escalation from the India-China border areas for restoration of peace and tranquillity.

Srivastava recalled his June 26 statement, when he had said that the conduct of Chinese forces this year, including the deployment of large body of troops and changes in behaviour, accompanied by unjustified and untenable claims, has been in complete disregard of all the mutual agreements. He re-emphasised that “the maintenance of peace and tranquillity in the border areas is the basis of our bilateral relationship,” and expressed the hope of China's sincerity in the endeavour. The MEA did not confirm the date of the next WMCC but said it will be held soon. Srivastava added, “We have also made it clear that India is fully committed to observing and respecting the LAC and that we will not accept any unilateral attempts to change the status quo along the LAC.''

Responding to a query on US secretary of state Mike Pompeo saying that India and the US should work together to counter China, Srivastava said that India and China being both prominent countries, “this issue [recent tensions following the Galwan incident] has attracted interest all over the world. As part of our diplomacy, we are engaged with those interested to convey our viewpoint.”