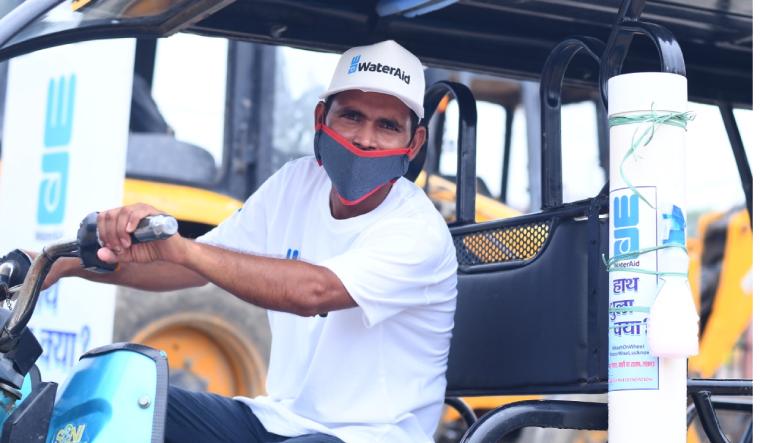 The mobile handwashing unit has been designed by WaterAid | Supplied

A simple contraption mounted on autorickshaws is nudging people towards washing their hands while on the move to minimise the risk of COVID-19 spread, as the country begins to open up even as infections surge.

Designed by WaterAid, an organisation that focuses on water, hygiene and sanitation, the mobile handwashing unit requires just a PVC pipe, two end caps and a water tap. The 4-inch broad and 2.6-inch-long PVC pipe, with two end caps at its extremities has a water tap fixed at its lower end. A liquid handwash is secured with tape at the mid-point of this unit. The unit can hold almost 5 litres of water, sufficient for 12-15 washes. The unit can be placed anywhere, from marketplaces to police traffic booths, and on autorickshaws, it means these units are like moving billboards, with many curious onlookers about them.

“Imagine, someone even called me a Corona warrior,” says Mohammed Firoz, a 34-year-old autorickshaw driver who ferries his vehicle from Lucknow’s Madiyaon area. He adds that he is often sought by passengers who ask for the ‘haath dhone wala rickshaw” (the handwashing rickshaw) at the auto stand where he waits for customers.

Awareness material developed by the Ministry of Health and Family Welfare since the start of the pandemic has listed regular washing of hands with soap and water as the most important preventive measure. Handwashing is a known mechanism to curb many illnesses, including diarrhoea. In the case of COVID-19, knowledge about the virus is still in the early stages. Handwashing has two benefits—breaking down the lipid envelope that encases the virus; and making the skin slippery so that rubbing can rinse away the virus. Frequent handwashing is, therefore, expected to curb transmission.

Not everyone is, however, convinced of the necessity to wash their hands on the move.

Mohammed Arman, a 35-year-old autorickshaw driver, says, “I can only request people. Some brush off my suggestion saying that there are in a hurry and that I should mind my own business.”

The handwashing unit is currently being installed in Lucknow and Bhadohi with the help of the local administration and partner organisations of Water Aid. In Bhadohi, the aim is to install the unit in 500 auto rickshaws by July 25 and thus saturate the urban area. If achieved, this will also create a record for the Limca Book under the category ‘unique activity for COVID response to contain spread’. 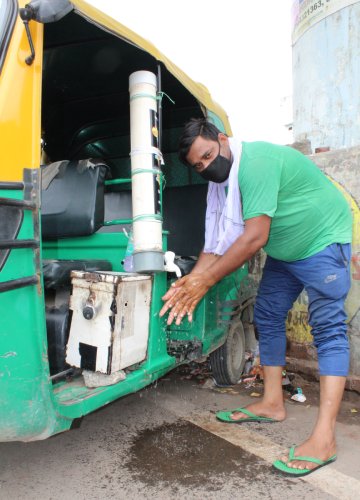 The initiative is not without its challenges. For instance, while the one-time fabrication cost for the unit varies between Rs 250-290, the recurring cost of the handwash is to be borne by autorickshaw drivers, and this becomes a challenge with diminished earnings. Before the pandemic, for instance, both Firoz and Arman earned between Rs 1,000-1,200 daily. Now, they make a fifth of that. This is not only because fewer people are out but also because their regular clients (for example school children) are home-bound. While a good flushing of the unit with water is all it takes to clean it, in the longer term, sediments dissolved in water will require a more thorough clean of the unit to ensure proper water flow. In case of any leakages—though easily fixed by sealing agents—users might not be inclined to do so as the unit is offered free of cost now. With fewer number of people using public transport at the moment, most units require filling of water only twice a day, but as the requirement increases, there is every chance that the task might be considered too cumbersome.

Arman says that though he would like to keep using the unit even after the pandemic is over, much depends on how his earnings pick up. “I hardly make any money right now to pay for such a thing no matter how useful I think it is,” he says.

Shishir Chandra, programme coordinator at Water Aid’s Lucknow office, who co-designed the unit with his colleagues says that the organisation has been more successful with the intervention in Bhadohi due to the response by its local partner. “To minimise the risk of contamination we have made autorickshaw drivers sign agreements that only they will touch the liquid hand wash dispensing unit and the tap. We have been regularly following up through phone calls and messages to reinforce safe handwashing practices.”

This constant messaging has started to have some effect. Firoz says, “The time used in handwashing gives me the chance to initiate a conversation on how each one of us can do our bit to stop the virus. I make it a point to tell everyone that they must step out only if absolutely necessary. That might mean less money for me, but, for now, saving lives is more important.”

It is even better when that noble act can be enabled by the simple turning of a tap and a drop of handwash.