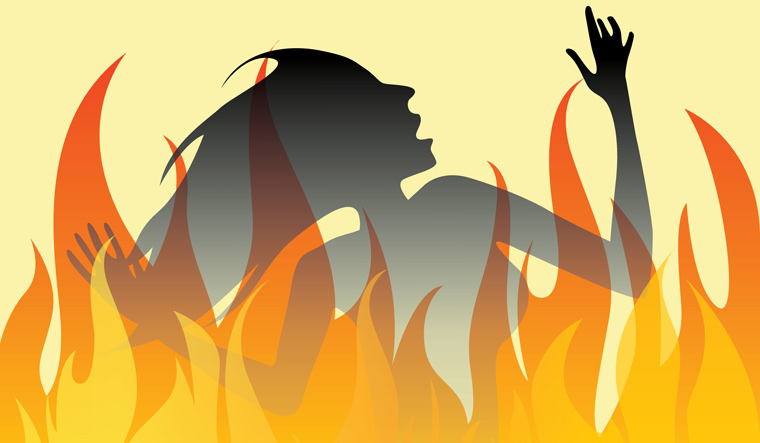 A woman and her daughter set themselves on fire in front of the Uttar Pradesh Chief Minister's Office in Lucknow on Friday allegedly over police inaction in a land dispute case in Amethi.

The women, identified as Gudiya and Sophia, sustained burn injuries and were admitted to the civil hospital for treatment where their condition is said to be critical, police said. The incident took place around 5.40pm in the state capital's high-security zone as it houses the Assembly as well as the Lok Bhawan—the office of Uttar Pradesh Chief Minister Yogi Adityanath.

The police personnel posted there swung into action as they saw the women engulfed in flames and rescued them, they said.

A video of the incident went viral on social media. "They had some dispute in Jamo area in Amethi. They had come here but didn't approach anyone and instead tried to immolate themselves in front of Lok Bhawan," a senior police officer said.

"We are probing the matter," the officer added. Police visited the village of the two women in Amethi late on Friday night.

Responding to the incident, former chief minister Akhilesh Yadav tweeted on Saturday whether the self-immolation attempt was not enough to "awaken the sleeping government or is the insensitive government and chief minister waiting for a big disaster".

Akhilesh asked "Is there anything as governance in Uttar Pradesh?"

Akhilesh's predecessor, BSP chief Mayawati, tweeted, "The mother and daughter were forced to commit self-immolation in front of the CM office in Lucknow due to lack of justice from the Amethi district administration in the land dispute case. The UP government should take this incident seriously and give justice to the victim and take strict action against the negligent officers, so that such incidents do not happen again.”

Uttar Pradesh Congress chief Ajay Kumar Lallu had claimed the self-immolation attempt proved there was “jungle raj” in Uttar Pradesh. “It has once again been proved that women, dalits, OBCs and other weaker sections are not safe. The shocking incident outside the CM office in Lok Bhawan exposes Yogi Government. There is jungle raj in the state, land mafias are ruling the roost,” Lallu was quoted as saying by Hindustan Times.

He demanded that the state government bear expenses of the women's treatment and act against those involved in their land dispute.