‘Tejas today is best in its class in the world’: IAF chief 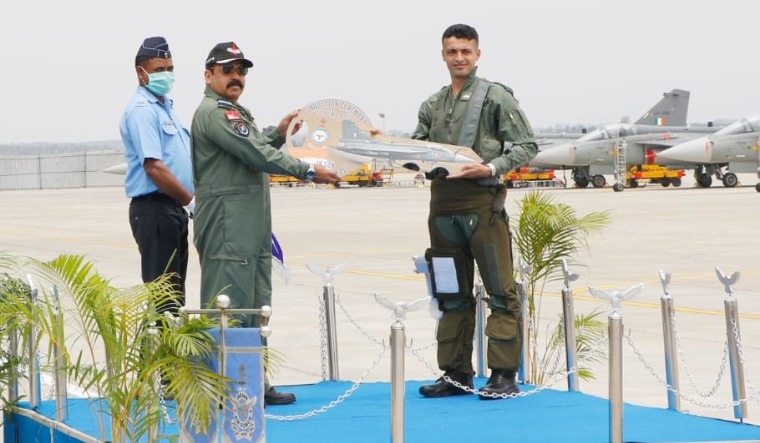 The formation of the second Tejas squadron (No 18 Flying Bullets) at Air Force Station Sulur on May 27 was an historic event for the Indian Air Force (IAF), Hindustan Aeronautics Ltd (HAL), the Defence Research and Development Organisation (DRDO), private industries and many other national laboratories supporting India’s home-grown military efforts.

It was also a very significant event for the Thiruvananthapuram-headquartered Southern Air Command (SAC), which has under its belt three fighter squadrons now: No 45 Squadron Flying Daggers and No 18 Squadron Flying Bullets (both at AFS Sulur operating Tejas) and No 222 Squadron Tigersharks (at AFS Thanjavur operating the Sukhoi Su-30MKI).

The two-hour-packed event held under tight social-distancing norms owing to COVID-19 restrictions, had many significant parts to it.

But what probably went under the radar was an inspiring speech made by Chief of Air Staff Air Chief Marshal Rakesh Kumar Singh Bhadauria.

With the help of a Ministry of Defence official, Onmanorama accessed a video file of the speech that inspired the air warriors, scientists and engineers involved with current and future aeronautical military programmes.

“This is probably the best speech of an IAF chief we have heard so far. It was very pointed and thought provoking. More than the speech, it was some directions for everyone. It was a wake-up call for all of us,” said a director of HAL, who did not want to be named.

Another official from Aeronautical Development Agency (ADA) said the Indian Air Force chief’s talk had all ingredients as to what various stakeholders had to do to keep the indigenous flag flying high.

“It was a speech with a purpose,” the official said, again not wanting to be named.

So what did the IAF chief speak that touched a chord with everyone present at AFS Sulur?

Air Chief Marshal Bhadauria took off smoothly and said the No 18 Squadron Flying Bullets has been resurrected with the advanced version of the Light Combat Aircraft Tejas with great thought.

“There are many firsts to the No 18 Squadron. This squadron was equipped with Ajeet, one of the initial indigenous aircraft after Marut in the IAF inventory. When the Southern Air Command got its first fighter squadron in 1985, it was again Ajeet manufactured by Hindustan Aeronautics Ltd (HAL) that was part of it,” the IAF chief noted about the unique history of the squadron.

The No 18 Squadron had moved there from Srinagar to SAC then. Later, they got converted to the MiG-27 in 1989 at AFS Hindan. It got number-plated in April 2016 and was resurrected in April this year at AFS Sulur.

“Your squadron motto of Teevra aur Nirbhaya (swift and fearless) is apt in many ways. Teevra epitomised by flying officer Nirmal Jit Singh Sekhon (Param Vir Chakra awardee, posthumous) and Nirbhaya is what you will get with LCA Tejas. It is now up to the commanding officer and all the air warriors of No 18 squadron to join the operations of IAF in full form at the earliest,” he said.

He said the IAF has placed lots of trust in the new squadron members and they are the best men put on the critical job.

“You are amongst the best in the IAF, so that you will have to operationalise the squadron in the shortest span of time. Tejas today what you are getting is the best in its class in the world. Take my word for it. It is for you now to study it, gain knowledge, understand its capabilities, maintenance aspects and know everything about the aircraft. With your brains, with your abilities to synergise and with networking, you must ensure that Tejas continues to grow and increases its combat capabilities,” he told the air warriors present there.

The Indian Air Force chief soon dived into the business end of the talk and thanked all stakeholders who played a part in making the Tejas a war-fighting machine.

He then turned his attention to the makers and designers of the Tejas present there.

“I must also tell ADA, HAL, DRDO and others that there’s a big responsibility coming your way as we grow the Tejas fleet. We must get the supply chain right, efficiency in provisioning of spares right and we must be able to maintain and sustain the fleet effectively,” the IAF chief said.

He said having inducted two squadrons of Tejas jets, now the most critical aspect for the IAF is to maintain and sustain the fleet. He also urged all agencies to work together and proactively support the maintenance setup.

He said the IAF is transforming in its operational philosophy, in terms of training, networking, security, information and weapons.

“I assure you lot of work is happening in order to provide you the technology and capability edge as far as possible within the country. Only where it is absolutely essential, we will seek some support from outside. So much is possible within our country and that is why our attention has shifted in a major way to indigenous manufacturing,” he said.

Wake up and move on

Turning his focus to industry, the Indian Air Force chief said that COVID-19 has impacted the private sector, MSMEs and supply chain of defence PSUs.

“We cannot sit back and take these as excuses or demoralising factors. We must get up and start moving. When I took over as IAF chief, I said we will do everything possible to support the industry. The two squadrons here is very much a testimony to what we have promised,” he said.

He said the IAF is keen to look two to three decades ahead, with many homegrown systems set to join its fleet. He said the orders for 83 Tejas MK1As will be in soon while the IAF’s unflinching support for LCA MkII and Advanced Medium Combat Aircraft (AMCA) would continue.

“Our vision is clear. For future fighters, host of radars, weapons, sensors and AI systems, we will seek industry’s support. We need 300-plus fighters and 70-plus HTT-40 trainers, which we have indicated. The industry must move together to synergise and take advantages of all available opportunities. We should able to grab the opportunity and change the face of aviation industry in the country in the next 10 to 20 years. If we do not act now, we would only lose time, opportunity and the capability as we go ahead,” he said.

The IAF chief said the IAF is clear with what it needs from indigenous sources in the next few decades. “Working together is the key and I am confident that we will be able to improve production rates, timelines, reliability factors, cost-cutting measures and efficiencies across the board,” he said.

Admitting that budget will be cause of concern for everyone in future, the IAF chief called for innovative methods to tackle the problem.

“Budget will be an issue in the immediate future. Again, budget constraints should not become an excuse for the industry to take off. Demand is what matters more. If you get together, there are innovate ways of doing budgeting for firm programmes. I would urge the industry partners to come together for budgeting with innovate ways and overcome this period of constraints and yet move forward,” he said.

He signed off his compact speech again reminding both Tejas squadrons that they will become the core of IAF’s growth in terms of combat capability for the future.

“As a core, you need to grow and absorb the 83 new LCAs that will come up in the next decade and ensure that the combat capability is proliferated into the IAF in the right manner. I have no doubt when the opportunity arises, these two squadrons will surprise the adversary with their capability and determination,” he concluded.

Air Marshal T.D. Joseph, who is currently the Senior Air Staff Officer at Bengaluru-based IAF Training Command, was present at the event as the Commodore Commandant of No 18 Squadron.

(The writer is an independent aerospace and defence journalist)