Locusts yet to cause any crop destruction in Uttar Pradesh 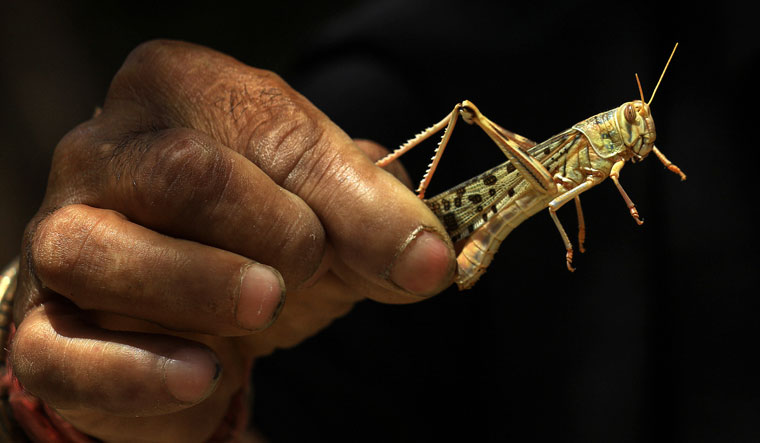 A man holds a locust, in Jaipur, Rajasthan | PTI

So far, there have been no losses due to locust attacks in Uttar Pradesh, and with a change in direction of the wind, locusts will move away from the state, according to the agriculture department.

Vinay Singh, the state’s additional nodal officer for locust control, told THE WEEK, “A small swarm had been reported near Agra on Wednesday, but it has not caused any harm. A slight change in the direction of the wind will take the insects 200-300km away from the districts bordering Rajasthan”.

In February, the state’s agriculture department had warned against possible locust attacks and initiated an awareness programme for the same.

Singh said the early warning and measures undertaken to counter the attack had stood the state in good stead. “We are fully prepared in terms of awareness and also with stocks of required insecticides”, he added.

As locusts find a resting place with the onset of the dark, their position and direction of movement remains variable.

The type of locusts responsible for the current attack is the desert variety which is pink or brown in colour. This does not breed normally in the climatic conditions of the state, but is carried by the westerly winds blowing in from North Africa and West Asia over Pakistan. “Currently there is no group headed towards the state”, said Singh.

According to Anil Sharma, former plant protection officer and desert locust expert from Rajasthan, climatic changes, including unexpected rainfall between March and May, is the reason behind the current movement.

“Locust control measures are very poor in Iran and Pakistan over which this particular species fly. This year there has been one additional generation of locusts that has matured because of climatic changes, thus their total numbers and the ensuing destructive potential is higher”, Sharma told THE WEEK.

The climatic conditions responsible for the current locust movement include the change in wind direction due to Cyclone Amphan.

Sharma noted that while in the previous years there would be nearly one million locusts in one square kilometre, this year the number is eight times more.

Locust attacks are dangerous as swarms of these insects move in large numbers and upon darkness chomp through green leaves and vegetative plants quickly and in very high quantity. Though each insect weighs only about two to three grams and intakes that amount food, the nature of movement ensures large scale destruction.

They breed in winter, spring and summer and become active in periods of less rainfall, drought and summer. Their seasonal migration is influenced by temperature, wind and vegetation. Locust outbreaks are most frequently reported in Gujarat and Rajasthan.

These insects require sandy soil to breed. Since this soil is largely absent in the state, UP has to only guard against the crop destruction.