Ten UP districts on alert after locust swarms attack crops in Rajasthan, MP 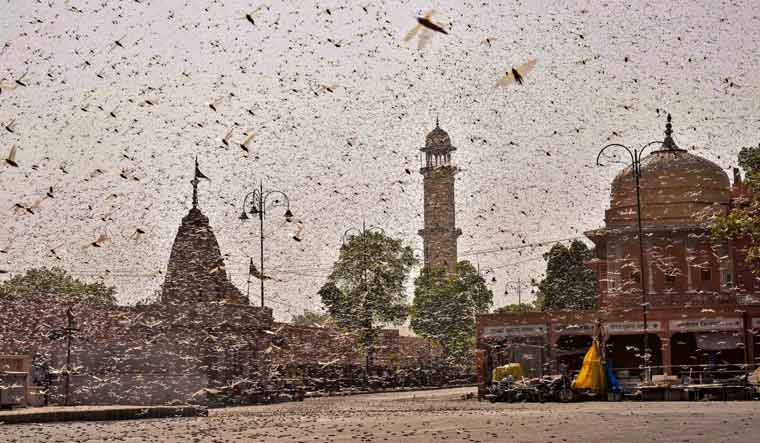 Swarms of locust in the walled city of Jaipur, Rajasthan | PTI

At least 10 districts in Uttar Pradesh that border Madhya Pradesh and Rajasthan have been put on alert after swarms of locusts attacked crops in the two states, an official said on Tuesday.

The locusts initially entered Rajasthan from Pakistan. From Rajasthan, locust swarms also entered Madhya Pradesh over the past few days.

"In view of the threat of locust attack in areas bordering Madhya Pradesh and Rajasthan, local officials have been put on alert and asked to remain prepared with chemicals in tractor mounted sprayers, power sprayers and fire brigades, and undertake heavy spraying during the night," a government spokesman in Lucknow said.

Besides, local villagers have been asked to make noise by beating 'thalis' and bursting crackers to drive away a locust swarm.

These measures will help in controlling or eliminating locusts at their resting place, the spokesman said, adding that officials have been asked to be in constant coordination with technical teams of the Locust Warning Organisation and farmers.

He said a swarm of locusts was seen in the jungles of Jhansi on Sunday and 40 per cent of it was destroyed after chemicals were sprayed by state and central government teams.

Due to the wind direction, there was a threat from this swarm in Mahoba district, which was put on high alert, he said.

There are reports of partial damage to vegetables in 25 hectares of area and a detailed inspection of the extent of loss is being done, the spokesman said.

Another swarm was active in Karauli in Rajasthan, following which an alert was issued for Jhansi, Lalitpur, Jalaun and Auraiya and their adjoining districts like Hamirpur, Kannauj, Etawah and Kanpur Dehat, he said.

Deputy Director Agriculture Kamal Katiyar said, "The swarm of locusts is moving and is small in size. We have got news that nearly 2.5km to 3km long swarm of locusts has entered the country. A team has come from Kota (Rajasthan) to tackle the locusts."

He said at present, the locust swarm is at Bangra Magarpur. "Spraying of insecticides will be done in the night," Katiyar said.

The Mathura district administration has started early preparations in view of the growing locust threat and formed a task force.

Mathura District Magistrate Sarvagya Ram Mishra said 200 litres of chloropyriphos has been kept as reserve and its sellers in the area have been advised not to supply the chemical outside the district.

The Jhansi administration has also directed the fire department to keep its vehicle ready with chemicals to tackle a sudden movement by locust swarms.

District Magistrate Andra Vamsi, who chaired a meeting in this regard, said, "The villagers along with the common public has been told to inform control room about the movement. The locusts will go places where there is green grass or greenery. Hence, details about the movement at such places must be shared."