After COVID, cyclone, India bracing up for locust plague

Will Pakistan respond to India’s call for cooperative response to tackle locusts? 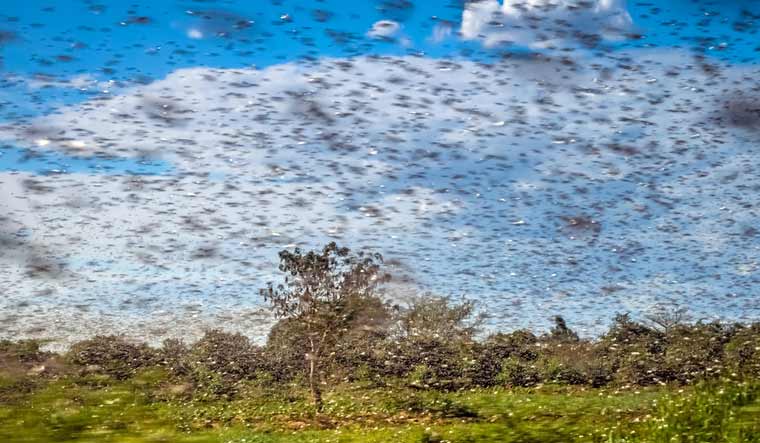 In Pakistan, adult groups of locusts are migrating towards the India border from the Baluchistan region, Punjab and Khyber Pakhtunkhwa of that country | Shutterstock

Not even half the year has gone by, but nature is unleashing its fury in several ways. As if the ongoing Covid-19 wasn't bad enough, the east coast has just had a battering with Cycline Amphan. And now, there is a cloud of trouble building up on the west, this time in the form of a plague of locusts. Experts say that a larger than normal locust attack could happen this year. Such a plague will give a heavy blow to agriculture, just at a time when food security has become paramount.

And this time, instead of hydroxychloroquine and paracetamol diplomacy, India has proposed a malathion diplomacy to its neighbours, Iran and Pakistan. Iran has responded positively, but will Pakistan reach out and accept the poison gracefully?

As per the Food and Agriculture Organisations (FAO), an independent international body under the United Nations, hopper bands of the desert locust are maturing along the south western coastal plains of Iran, and another generation of breeding is underway–hatching–in the Sistan Baluchistan region. In Pakistan, adult groups are migrating towards the India border from the Baluchistan region, Punjab and Khyber Pakhtunkhwa of that country.

According to the Ministry of Environment, Forests and Climate Change, "Locust swarm from Pakistan has entered Rajasthan, Punjab, Haryana and Madhya Pradesh, threatening major damage to standing cotton crops and vegetables. Rajasthan is the most affected state. During the current year, the swarm of locusts has entered India earlier than their normal time of June and July. States are adopting various means for controlling the swarms." These measures mostly include spraying of the pesticide malathion.

Keith Cressman, a senior locust forecasting officer at FAO, has already warned that the world is facing one of the worst locust situations in decades. He has warned that the India-Pakistan region, already facing a build up of local locust populations, will see greater swarms in the coming weeks as locusts fly across the Indian Ocean from the Horn of Africa.

India has a well oiled mechanism to deal with locusts--the nodal authority being the Locust Warning Organisation (LWO) under the agriculture ministry. It has a contingency plan, which gets triggered the moment warnings of a build up start coming. The contingency plan involves several ministries, like civil aviation for aerial spraying and earth sciences for topological and meteorological data.

Between 1812 and 1997, India was hit by locust plagues several times, but in recent years, with good management, there have not been devastating plagues. In fact, according to LWO, there have been no locust upsurges since December 2011.

There are four types of locusts that plague the subcontinent, namely, the desert locust, migratory locust, Bombay locust and tree locust. This year, the swarms building up are of the desert locust.

India has an established mechanism with Pakistan for cooperation in locust control, which includes regular border meetings between officials on both sides. Six such meetings are held every year, led by plant protection advisers, either at Munabao in India or Khokhrapar in Pakistan. There is also a wireless communication between Jodhpur and Karachi between June to November for exchanging information on the subject.

India, in its bid to further regional cooperation, has proposed a coordinated response to desert locust control to Iran and Pakistan, suggesting that India can facilitate supply of malathion and even carry out pest control operations in Sistan Balochistan and south Khorasan provinces.

Iran has given a positive response to the offer, but New Delhi is wondering whether Pakistan will rise above its narrow-minded approach when it comes to regional cooperation. Pakistan's reaction to India's initiative for a cooperative response to tackling Covid-19 was tepid at best. At the virtual SAARC summit, while every member nation was represented by the head of government, Pakistan sent an official from the health ministry, who spoke less about cooperation and more on hostility.

It isn't as if Pakistan is unaware of the growing threat regarding its food security due to the current locust build-up. Prime Minister Imran Khan has already declared a locust emergency in the country, the last time a plague on this scale happened was 27 years ago. Pakistan has, however, begun cooperation with its all-weather friend China for locust control. According to reports, China has already donated 300 tonnes of locust-control pesticide and 350 vehicle-mounted sprayers to Pakistan this year alone.