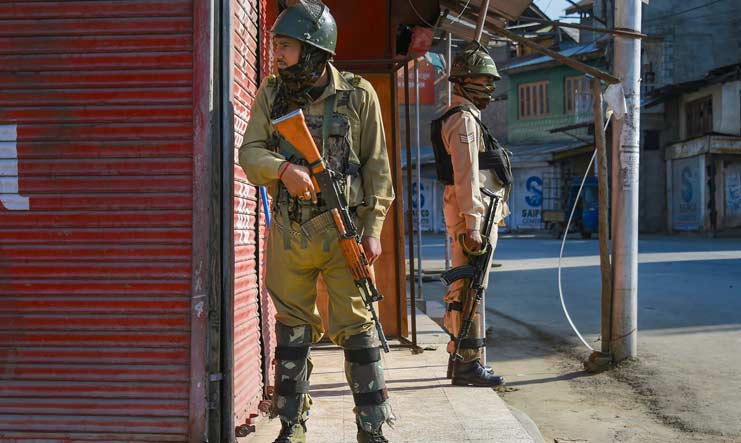 Security personnel stand guard during an encounter with militants at Kanimazar, in downtown Srinagar | PTI

Two Hizbul Mujahideen militants were killed and four security personnel were injured in an encounter at Kanimazar, Nawakadal in Srinagar on Tuesday. The militants included divisional commander of Central Kashmir, Junaid Sehrari—who is the son of Tehreek-e-Hurriyat chairman Ashraf Sehrari—and Tariq Ahmed Sheikh from Pulwama.

The injured security men include three CRPF men and a policeman from the special operations group (SOG). The killing of Sehrari is another blow to Hizbul after the loss of chief operations commander Riyaz Naikoo at Beighpora in Pulwama on May 6 along with another militant in an encounter with security forces.

He said the two slain militants were working to lure the youth into militancy and to carry out grenade attacks, adding that Tariq had been active in the Pulwama and Shopian districts. He said the operation was carried out clinically; one house caught fire which was brought under control, adding that the house had been evacuated of its inmates in the morning.

During the process a CRPF man and one police SoG personnel were injured.

He said in the final assault, the remaining militant hurled a grenade, injuring two CRPF men. However, all the injured personnel are stable.

Asked about the number of militants in Srinagar, the DGP said it keeps on fluctuating and only 14 are active in the entire central Kashmir. He said that not more than 240 militants are active in Kashmir.

He said 73 militants were killed this year so far and 95 militants and their associates were arrested.

The last time an encounter took place between militants and security forces in Srinagar was on October 18, 2018, in which two Lashkar-e-Taiba militants, a policeman and a civilian were killed in the Syed Ali Akbar area of Fateh Kadal