The team will visit COVID-19 infested districts of the state 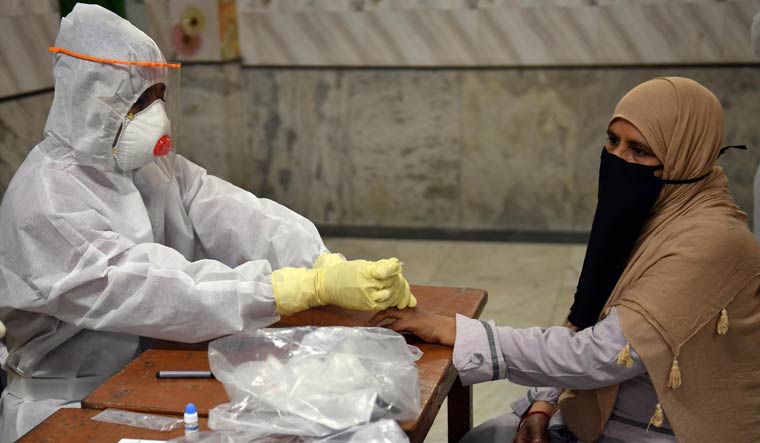 The Narendra Modi government on Monday sent an inter-ministerial team of officers to COVID-19 infested places of West Bengal after large scale violation of lockdown norms and lacunae in health sector were reported from the state.

The inter-ministerial central team (IMCT) has been divided into two groups and each group will be headed by an additional secretary-level officer.

The first team, which will visit the districts of Kolkata, Howrah, North 24 Parganas and East Midnapore, would be headed by Apurba Chandra, additional secretary, defence. The second team, which has headed for North Bengal districts of Darjeeling, Kalimpong and Jalpaiguri, is headed by Vineet Joshi, additional secretary of HRD ministry. Each team has five senior officials from different ministry.

While Kolkata, Howrah, North 24 Parganas and East Midnapore are largely treated as red zones, Kalimpong and Darjeeling were mentioned by the health ministry as zero COVID-19 case districts a couple of days ago.

“After analysing the prevalence of such violations in hotspot districts, it is clear to the central government that the situation is especially serious in Kolkata, Howrah, Midnapur East, 24 Parganas North, Darjeeling, Kalimpong and Jalpaiguri districts of the state of West Bengal,” the letter said.

Interestingly, districts of Jalpaiguri, Kalimpong and Darjeeling have not been mentioned as hotspots by the Centre. The home ministry said that the central government has exercised its power under sections of National Disaster Act.

The ministry said that despite an order of the Supreme Court to follow the directions of the central government regarding maintaining of lockdown norms, markets were kept open in different parts of these hotspots and vehicles were allowed to ply.

“It has posed a serious health hazards and risk for spread of COVID-19, which is against general interest of the public,” said the letter.

The MHA said while giving order to the states, the Center not only asked for strict following of the guidelines but also expected each state would take further strict measures to implement the order.

“They should not dilute the guidelines given under National Disaster Act 2005,” it said.

The MHA has asked the West Bengal government to give the team enough logistic support and manpower to visit the places. The state should provide them the PPE and facilitate their meeting with the treating doctors. They will talk to doctors about the threats they are facing. The aviation department has been asked to give them air travel facilities. The team landed in Kolkata on Monday as they have been asked to visit the places as early as possible.

Meanwhile, Chief Minister Mamata Banerjee wrote a letter to Prime Minister Narendra Modi, questioning the need of sending an inter-ministerial team to the state. She also questioned the choice of districts.

For instance, the districts which mentioned as seriously infected areas reported COVID-19 cases many days ago.

"Jalpaiguri saw the last case on April 2, Kalimpong on April 4 and Darjeeling April 14," she said.

Banerjee said Union Home Minister Amit Shah called her on Monday to inform about sending the team. "But by then the team had landed in Kolkata airport,"she said.

Banerjee also informed that the prime minister had suggested that state would provide the logistics.

"But the team arranged logistics from BSF and SSB and reached the spots," said she.

Chief Secretary Rajiva Sinha said, "The team has not come to us, but went to field directly on their own from airport. I have communicated with them and told them that if they need any information they should contact us, otherwise we would not let them visit."

For last one fortnight, Governor Jagdeep Dhankhar has sent multiple reports of the violation of lockdown in West Bengal. A vocal Dhankhar has also been targeting the Mamata Banerjee government over alleged hiding of data and alleged scam of PDS system.

West Bengal has reported around 253 COVID-19 positive cases and 12 deaths so far. In the last 24 hours, 54 new cases were reported, mostly from Kolkata and Howrah.

Several health experts have termed the situation in Kolkata and Howrah as serious as hospitals in these areas are getting a huge number of patients complaining different symptoms related to COVID-19. The state government enhanced the testing rate only a couple of days ago and allowed rapid function test along with pool tests to be done by molecular labs.