‘Aaya Ram, Gaya Ram’: A contemporary history of defections to the BJP 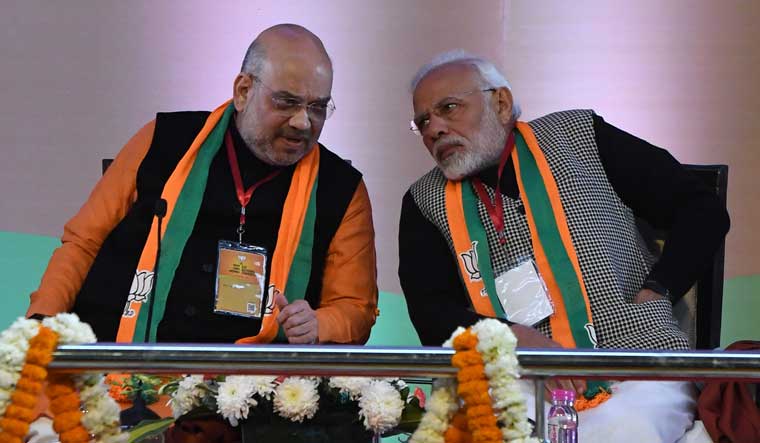 Horse-trading is not new for the Bharatiya Janata Party, nor is it new to Indian politics. The very term commonly used for it—‘Aaya Ram, Gaya Ram’—dates back to 1967, when Gaya Lala defected thrice in a fortnight, first from the Congress to the Janata Party, then back to the Congress and then back again to the JP.

Now, with the BJP likely to stake their claim to form a government in Madhya Pradesh after 16 Congress MLAs defected to it, the lotus party proves that it has mastered the art of wooing MLAs from its rivals.

With Madhya Pradesh, the BJP adds one more state to a list that includes Manipur, Goa, Arunachal Pradesh and Karnataka—places where the BJP came to power on the heels of defections from other parties.

The best-known example of this is in Karnataka. In 2008, the BJP initiated what is now known as ‘Operation Lotus’ to poach over 20 MLAs from JD(S) and the Congress. History repeated a decade later in 2019 when 13 Congress MLAs in Karnataka rebelled and joined the BJP (one of whom later returned). Together with three MLAs from JDS and one from Karnataka Pragnyavantha Janatha Party (KPJP), the 17 rebels hoped to be part of a ruling BJP government, but were later disqualified by the speaker of the house. The Supreme Court upheld their disqualification but struck down a provision that would have barred them from contesting elections till 2023—the rebels were were allowed to contest in the bypolls elections that would determine the fate of the government.

At the time, Congress spokesperson Randeep Surjewala came up with a new abbreviation to replace ‘Aaya Ram, Gaya Ram’: “MODI—Mischievously Orchestrated Defection in India”. But, it may not be the PM who strategises: Karnataka Chief Minister Yediyurappa was later seen in a leaked video attributing Amit Shah as the mastermind of the operation. 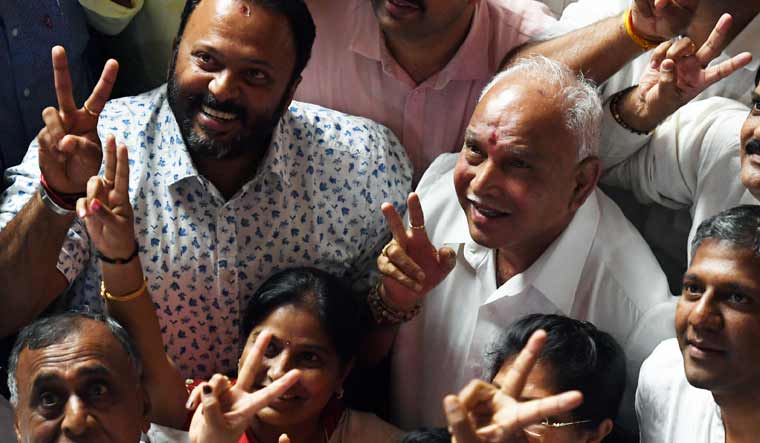 The cost of bringing in outsiders and offering them ministerial berths is that party men would lose out on the same—turning them into potential rebels as well. During the bypolls, the BJP lost two members, Sharath Bachegowda and Kaviraj Urs, who wanted to contest in the same seats being given to the rebels. Staging their own rebellion, they were soon removed by the party’s state leadership.

The orchestration of power had by then become a staple of post-election government building.

Earlier, in both Goa and Manipur, the BJP managed to turn hung assemblies to ruling governments after getting rival MLAs to defect to it.

In Goa in 2017, the Congress was the single-largest party after the elections with 17 seats while the BJP had 13. The ‘magic figure’ to be attained was 21. However, despite falling short of this by themselves, the BJP came to power after winning the support of the Goa Forward Party, a party that switched sides after campaigning alongside the Congress during the elections. All three of the GFP MLAs extended their support to the BJP, prompting the resignation of the GFP president. Along with the support of the BJP-allied Maharashtrawadi Gomantak Party (MGP), the BJP+ had 21 MLAs, and were then invited to form the government by the governor of Goa.

Adding insult to injury, by July 2019, 12 Congress MLAs had defected to the BJP. The sheer number of defections allowed them to evade the 1985 anti-defection rules, which allows for defections provided it has the support of two-thirds of the legislative party.

Likewise in Manipur, the BJP were short of seats after the 2017 legislative assembly elections. While Congress had 28 seats, the BJP had 21. However, the BJP and its allies in the Naga People’s Front (NGF) and National People’s Party (NPP) were able to cobble together 30 seats. To reach the magic mark of 31 in the 60-member assembly, BJP got a single Congress MLA to support them as they staked their claim to form the government. There was a catch, however—the MLA never actually resigned from the Congress while doing so!

Thounaojam Shyamkumar Singh accompanied the 30 other BJP MLAs and allies to Raj Bhavan to meet the governor, and was then sworn in as a minister in the new cabinet. That very evening, he was expelled from the Congress for failing to take note of a show cause notice by the party. However, he continued to serve as a minister in the cabinet.

Was it legal? The answer is still debated—Congress filed multiple petitions in the tribunal of the speaker’s court but these were not taken up. They approached the High Court which declined to intervene but criticised the speaker for not acting. Finally, on January 21, the Supreme Court asked the speaker to decide the fate of Shyamkumar within four weeks. On February 29, the Speaker’s tribunal asked the apex court for four more weeks to decide. By this time, the state government made possible by Shyamkumar’s defection had been ruling for nearly three years.

Speaking to reporters prior to the swearing-in, Manipur Pradesh Congress Committee (MPCC) president T.N. Haokip remarked, “This is probably the first time in the political history of India that an MLA-elect of an opposition party has defected and joined the ruling coalition government directly as a minister.”

The tale has another bizarre element: Eight other Congress MLAs later ‘defected’ to support the BJP, but did so without resigning from the Congress or issuing letters of support for the BJP—sitting in the opposition benches to avoid violating the anti-defection law!

In Arunachal Pradesh too was a tale of defection, where the Congress went from having 47 MLAs to having just one in the span of a year. The 2014 election yielded a Congress majority and the grand old party ruled the state for nearly two years. However, political crises rocked the state in 2016, giving it a total of three CMs in a single year. In September 2016—a month after former CM Kalikho Pul was found hanging at his official residence—then Congress chief minister Pema Khandu took 43 of his party MLAs with him to join the People’s Party of Arunachal Pradesh (PPA), which was in alliance with the BJP. Then, on December 31, 33 PPA MLAs joined the BJP and formed the government with Khandu as chief minister.

A few days later, two MLAs from the Congress defected to the BJP as well, leaving the Congress with just one MLA in the house.

Another state, Maharashtra, was briefly the site of an MLA takeover in 2019. Ajit Pawar, son of Sharad Pawar, jumped ship from the NCP to the BJP and was promptly rewarded with deputy chief ministership. However, in order to evade anti-defection laws, he had to bring over 36 MLAs from the NCP. Devendra Fadnavis said Pawar had assured him of the support of at least 54 MLAs. But, the tides turned after the resultant government lasted just 80 hours. Pawar resigned from his post just hours after the Supreme Court ordered the government to prove its majority—something they could not do without him. Almost immediately after, Fadnavis resigned as well, leaving the Shiv Sena, NCP and Congress to form a government under the ‘Maha Vikas Aghadi’ coalition. 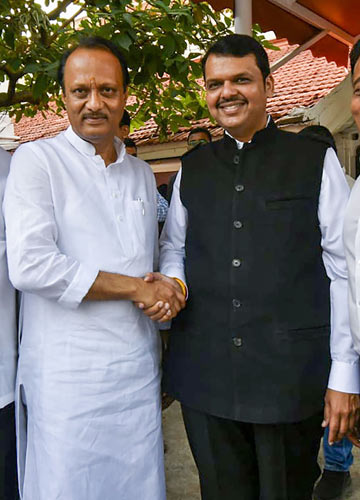 According to NDTV, Pawar quit after a one-hour conversation with Fadnavis where he told the former CM that it was impossible for him to get the required numbers. It worked out well for him as he became deputy CM under the MVA government, raising suspicion that he had become a political trojan horse. Pawar next met Fadnavis in public just weeks later, appearing on stage with his estranged political bedfellow to grace the marriage of an independent MLA. The two had an animated 20-minute discussion which Pawar says was about “the weather”.

More often than not, it is the Congress that serves as the source of MLAs for the BJP—and for other parties as well. Prior to the 2019 general election, 21 Congress MLAs and one MP defected to the BJP.

In Gujarat, where the BJP do not even require MLAs to maintain their majority, five Congressmen have defected since 2018. This only adds to the 14 who left the Congress and joined the BJP prior to the 2019 election. In Uttarakhand in 2017, 14 ex-Congressmen were given BJP tickets, of which 12 of them went on to win.

The BJP is not the only recipient of Congressmen: In Telangana, the Telangana Rashtra Samithi (TRS) has wooed 12 Congress MLAs to their side over the course of two-and-a-half years.

Horse-trading is not unique to the BJP. In Indian Politics and Society Since Independence: Events, Processes and Ideology, Bidyut Chakrabarty writes that “between 1967 and 1970, nearly 800 legislators crossed the floor and nearly 155 of them were rewarded with ministerial office...there was no respite because defection turned out the a safe instrument for upward mobility for the legislators, who suddenly became important for the survival of the coalition”.

While changing employers only became a trend among the youth in recent times, politicians have proved for decades that it is the way to go if upward mobility is the goal.