Karnataka crisis: Who are the 15 rebel Congress, JD(S) MLAs? 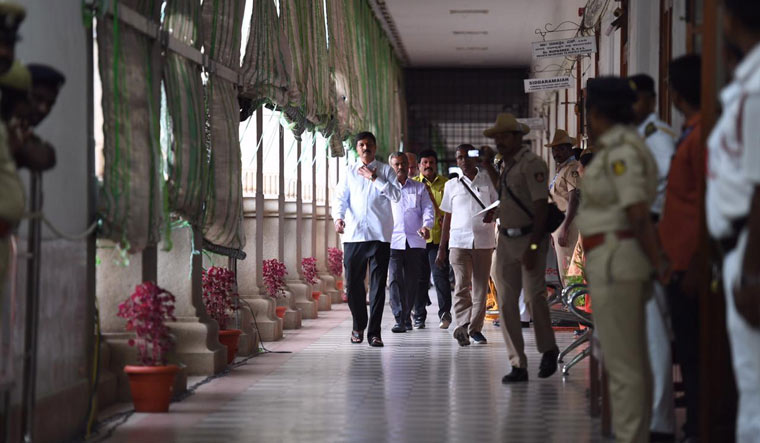 Since July 1, Karnataka has been in the throes of a political crisis caused by the resignations of 13 MLAs of the Congress and three of the JD(S). Both parties are the main partners in the H.D. Kumaraswamy coalition government. In addition, two independent MLAs switched support from the Kumaraswamy coalition to the BJP camp.

On July 18, one 'rebel' Congress MLA, Ramalinga Reddy, decided to withdraw his resignation and said he would be staying with the Congress.

As political instability and uncertainty in Karnataka continues, questions abound about who are these 15 MLAs? Where did they come from? And what do they want?

THE WEEK presents a snapshot of each of these MLAs:

Pratap Gouda (63) won the 2018 Assembly elections from Maski constituency in Raichur. In 2008, he was an MLA belonging to the BJP and later joined the KJP, started by B.S. Yeddyurappa, after he parted ways with the BJP. In 2013, Gouda joined Congress and was elected as an MLA. He was re-elected as Congress MLA in 2018. He has previously denied allegations of brokering an agreement with the BJP.

Ramesh won from the Gokak Assembly constituency in Belgaum, north Karnataka. Belgaum (also known as Belagavi) is unofficially considered as the second capital of Karnataka and has 18 Assembly segments. The Jarkiholi family, sugar barons of the region, have controlled the region's political arena for the past 15 years. Ramesh Jarkiholi was first elected into the Karnataka Assembly in 1999, backed by the Congress, and served four terms as an MLA. In the Congress-JD(S) coalition government formed in 2018, he was the municipal administration minister. He was reportedly disgruntled with the “inconsequential” portfolio.

B.A. Basavaraj, popularly known as Byrathi Basavaraj, contested for the first time in 2013, representing K.R. Puram constituency in Bengaluru on a Congress ticket and won with ease. Basavaraj had served as corporator of Hoodi ward before contesting for the Assembly elections. A known confidant of former chief minister Siddaramaiah, Basavaraj had reportedly expressed wishes to lay down ‘conditions’ regarding seat-sharing between the JD(S) and Congress. Basavaraj has denied the allegation that the BJP backed his decision to tender his resignation to the Assembly.

Patil is a popular actor in the Kannada film industry. A former sub-inspector, he served as a three-term MLA from Hirekerur Assembly constituency. Patil began his political career by getting elected as an MLA on a JD(S) ticket. Later, he joined the Congress and won twice from Hirekerur. Patil has previously advocated proper representation for the Veerashaiva-Lingayat community in the state Cabinet. In May, the Congress released an audio clip, accusing Yeddyurappa of attempting to poach Patil by offering him a cabinet berth. BJP leaders challenged the authenticity of the clip.

Somashekhar won the Assembly seat in Yeshwantpur in 2013 on a Congress ticket and won again in 2018. Somashekhar is known to be a close aide of Siddaramaiah. Somashekhar took charge as chairman of the Bangalore Development Authority (BDA) in January. He expressed dissatisfaction regarding pace of development work under the coalition regime headed by Kumaraswamy in January. The statement drew controversy in the media, following which he issued an apology.

Associated with the Congress for about 30 years, Kumathalli had won the party a victory at Athani in the last elections, a constituency that was held by the BJP for 12 years. Soon after, rumours of him quitting the Congress had surfaced, which he went on to deny as mere speculation.

In February, Kumathalli was among the first coalition MLAs to skip Assembly proceedings, ignoring the party whip. His absence from the Assembly had even led to a Habeas Corpus petition filed in the Karnataka High Court. The petition raised suspicions that Kumathalli was being illegally detained by rebel MLA Ramesh Jarkiholi in Mumbai and that his life was in danger. But denying the claims, Kumathalli appeared in the High Court and then proceeded to hand in his resignation on July 6 along with Jarkiholi.

A Congress veteran and seven-time MLA, Reddy had worked for the party for the last 45 years. Elected as Home and Transport Minister in the Siddaramaiah government, Reddy had expressed his disappointment at being sidelined by the Congress when it came to ministry formation last year. Representing the large BTM Layout constituency in Bengaluru, Reddy’s resignation was perceived as being an immense setback for the Congress. However, Reddy's decision to withdraw his resignation a day before the July 18 floor test came as a relief to the Kumaraswamy government as he reassured the Congress of his decision to vote in favour of the trust vote.

Known as the richest MLA in India, Nagaraj is the housing minister and MLA from Hoskote. A loyalist of former chief minister Siddharamaiah, he wields significant influence in the party and is one of the prominent rebel MLAs. His conflicts with the Congress go back to 2018, when he fought for the representation of the Kuruba community of which he is a member. Nagaraj had orchestrated a statewide protest for the same and had even threatened to chart his own course if the party failed to make amends. Nagaraj stood steadfast in his decision to resign as the Congress leaders failed to pacify him even after repeated attempts.

Anand Singh is a three-time MLA from the Vijayanagar constituency, who left the BJP in 2018 to join the Congress. He was the tourism minister for Karnataka from 2008-2013 under the state's first BJP government. He had cited the government’s decision to sell land to the JSW Steel for mining as the reason for his resignation. Singh said that he has kept his resignation open-ended and if his demands—making Vijayanagar a separate district and cancelling the decision to sell 3,667 acres of land to JSW Steel in Ballari—were met, he would withdraw his resignation.

Shivram Hebbar is a Congress MLA from the Yellapur constituency. The Uttar Kannada unit of the Congress had filed a complaint with the police claiming Hebbar was missing just a few days after his resignation from the Assembly. He had earlier put up a Facebook post apologising to his voters for his resignation. Hebbar said that he was forced to take the decision as the development of Uttar Kannada had taken a hit and that he chose to resign and protest against the government regarding the issue.

Munirathna is a two-time Congress MLA from the Rajarajeshwarinagar constituency. He started his political career as a municipal corporator from Yeshvantpur. He is also a well-known Kannada film producer. Munirathna was one of the accused in the EPIC card irregularities case in Jalahalli, Bengaluru.

Roshan Baig is a Congress MLA and a former minister representing Shivajinagar constituency in Bengaluru. He has held different ministerial posts in Karnataka for six terms. Baig was earlier detained by a special investigation team for his alleged involvement in the IMA Jewels Ponzi scam and was released on July 16 after questioning. Baig was suspended in June from the Congress for anti-party activities. He is also the chairman of the Karnataka state hajj committee.

K, Sudhakar is a two-time Congress MLA from the Chikkaballapur constituency. He was the former Pollution Control Board chairman of Karnataka. He submitted his resignation to the speaker on July 10.

MLA of the Mahalakshmi Layout constituency, Gopalaiah was among the first legislators to join the rebel camp. He had even remained in Mumbai with the rest of the dissenters, skipping a meeting that the speaker had called to review his resignation. But his proposed entry to the BJP has been met with opposition from the BJP workers. About 50 BJP members had met Yeddyurappa to protest against the inclusion of Gopalaiah who is suspected to have a role in the death of a BJP worker a year ago.

Adagaru Huchegowda Vishwanath is a four-time MLA and one-time MP from Mysore. He was the president of the Karnataka unit of the JD(S) and has also represented the Congress as an MP at the 15th Lok Sabha from the Mysore constituency. He quit the Congress to join JD(S) in 2017 and contested from Hunsur to be elected to the Assembly in 2018. He started his political career in 1978 with the Congress as an MLA in the 6th Karnataka Assembly. He has also held ministerial posts in Karnataka.

Narayana Gowda is a 53-year-old JD(S) MLA from Krishnarajapet. He is also the president of the pro-Kannada organisation Karnataka Rakshana Vedike, which he started with Janagere Venkataramaiah. He had blamed the lack of development in Karnataka as the reason for his resignation.

R. Shankar is an independent MLA from Ranebennur. He was the municipal administration minister for the Congress-JD(S) government. He is the only MLA from the Karnataka Praja Janata Paksha, a regional party from Karnataka, launched in 2016. He had announced his support to the BJP after his resignation.

Nagesh is an independent MLA from Mulbagal. He was the small scale industries minister for the Congress-JD(S) government. He was a former Congress member and contested in the 2018 Assembly polls as independent after not getting a party ticket from the Congress. He had announced his support to the BJP after resigning from the Assembly.