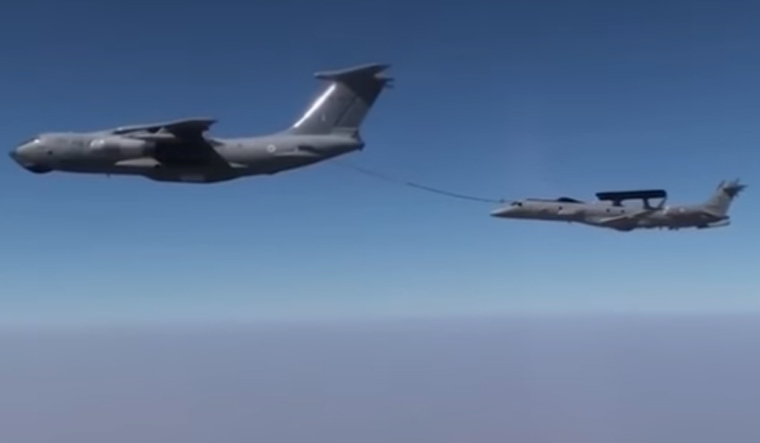 As the Indian Air Force marks the first anniversary of the attack on a terror training facility in Balakot, the country remains in awe of the prowess of its French-built Mirage 2000 multirole fighters.

The Mirage 2000 jets, armed with Israeli-built SPICE guided munitions, carried out the attack on Balakot, avenging the suicide bombing at Pulwama on February 14 last year.

However, the Balakot attack also saw the first official combat deployment of two Indian Air Force systems that are considered as 'force multipliers'. These were the Netra airborne early-warning and control (AEW&C) aircraft and the IL-78 aerial refuelling tanker. Both are unarmed aircraft, but contribute much to sharpen the Indian Air Force's edge.

The Netra consists of an indigenously developed radar system mounted atop a Brazilian-built EMB-145 business jet. A Netra jet was airborne at the time the Mirage 2000 fighters penetrated into Pakistan airspace.

Airborne-early warning systems have an inherent advantage over ground-based radars. Ground-based radars are hampered by the horizon, that is, the curvature of the earth and physical features like hills. An AEW plane like the Netra is not hampered by this restriction and can better pick up low-flying targets.

The first Netra system was inducted into service in 2017.

Civilian 'aircraft spotters' who use commercial aircraft-tracking websites had claimed the Netra was airborne for hours after the Balakot air strike to watch out for a possible response from the Pakistan Air Force. The Netra also helped the Indian Air Force prepare for the Pakistani retaliatory attack in Kashmir on February 27, when it spotted Pakistan Air Force F-16s taking off.

In March 2015, the Defence Acquisition Council cleared a project to install the indigenous DRDO radar system on the larger Airbus A330 aircraft at a cost of $825 million. While a deal to buy the A330 is yet to be signed, the Indian Air Force is believed to have a requirement for around six such AEW aircraft. Given the larger dimensions of the A330, compared with the smaller Netra platform, the DRDO radar would have a larger antenna and consequently improved range and detection capabilities. Additional advantages include the A330's greater flight range and higher operating altitude.

The IL-78 tankers of the Indian Air Force were also airborne during the Balakot operation and in the days afterwards, supplying fuel for 'thirsty' MiG-29 and Su-30MKI fighters that were flying to thwart possible intrusions from Pakistan.

Aerial refuellers help ensure fighters and other support aircraft can stay airborne for hours, enabling improved response time. Even the Netra aircraft can be refuelled in-flight.

The Indian Air Force inducted its first IL-78 tanker in 2003, but the fleet of six aircraft have been hit by reliability problems. The Indian Air Force launched two tenders to buy six additional tankers, selecting the A330 MRTT, a variant of the A330, but a contract was never signed due to price differences.